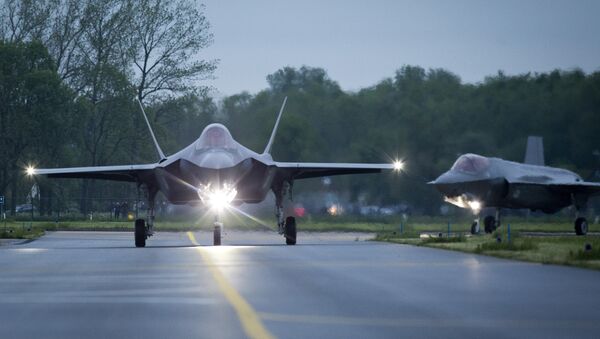 Several F-35A Lightning II multirole fighter jets of the US Air Force have arrived in the United Kingdom to carry out joint drills with the NATO forces, the US Defense Department said in a statement Saturday.

MOSCOW (Sputnik) — On Friday, the Pentagon announced the deployment of fifth-generation F-35A fighter jets to Europe this weekend.

“The forward presence of F-35s support my priority of having ready and postured forces here in Europe … These aircraft, plus more importantly, the men and women who operate them, fortifies the capacity and capability of our NATO Alliance,” US Army Gen. Curtis M. Scaparrotti, the commander of US European Command and NATO’s supreme allied commander for Europe said, as quoted in the statement.

Pentagon Announces Deployment of 5th-Gen F-35A Fighters to Europe
The US fighter aircraft have arrived for deployment at UK Royal Air Force’s Lakenheath military base in the UK eastern Suffolk county, according to the statement.

The US Department of Defense said Friday that the F-35A Lightning II fighters are sent to Europe to conduct training for several weeks as part of the European Reassurance Initiative. The Pentagon said the deployment represents "natural progression" of the F-35 program and would allow to demonstrate operational capabilities of the jets.

F-35 jets are set to be deployed to Europe on a permanent basis in the beginning of 2020s.

The creation of the European Reassurance Initiative (ERI) was announced by US President Barack Obama in 2014 as an alleged response to the "Russian threat." The ERI was established in the 2015 budget as a one-year, $1 billion emergency response.