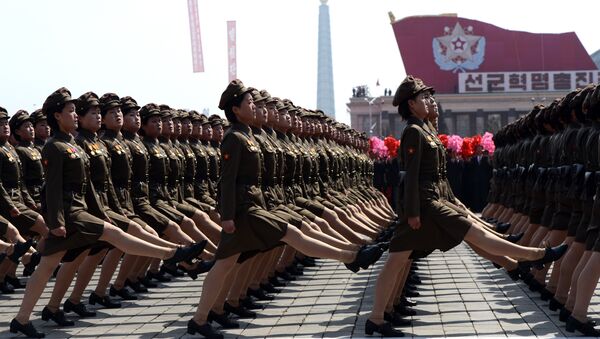 Amid rising tensions over the Korean peninsula, Pyongyang is readying to hold a massive military parade dedicated to a major national holiday.

MOSCOW (Sputnik) – Preparations for a large-scale military parade to take place this weekend in Pyongyang on the occasion of a key national holiday are underway in North Korea, South Korean media report.

"There is intelligence that North Korea has controlled traffic in Pyongyang for a military parade," a South Korean government official told The Korea Herald on Friday, explaining that the traffic control could be carried out in order to facilitate the transport of weapons and equipment to downtown Pyongyang.

On Saturday, North Korea will celebrate the Day of the Sun, marking the 105th birth anniversary of founder and former leader Kim Il-sung.

Beijing Anticipates War on Korean Peninsula ‘At Any Moment’
US aircraft carrier Carl Vinson, surrounded by a fleet of US warships, is heading toward the Korean Peninsula in advance of this weekend’s festivities in Pyongyang.

Friday media reports pointed to satellite observations suggesting that North Korea could be preparing for yet another nuclear test in the coming days. US media claimed that President Donald Trump may order a strike against North Korea in case Pyongyang decides to carry out another nuclear weapon test.

On Thursday, Trump told reporters at the White House that the North Korean "problem" "will be taken care of."