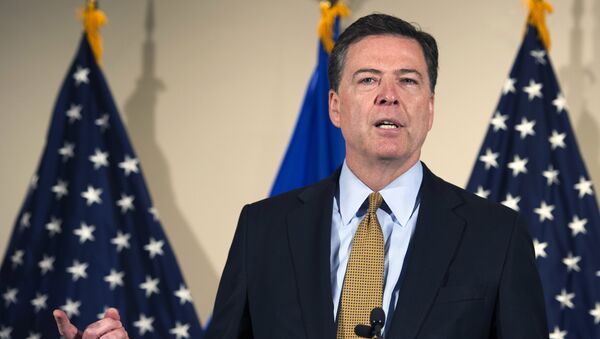 Why US Inquiry Into Russia's Alleged Meddling in Election Reached Deadlock
WASHINGTON (Sputnik) – According to an identified source talking to the Newsweek, Comey had a draft of his op-ed that he presented to officials at a White House meeting in June or July of last year.

"He [Comey] had a draft of it [op-ed] or an outline. He held up a piece of paper in a meeting and said, ‘I want to go forward, what do people think of this?’" a source told Newsweek on Wednesday.

Comey wanted to publish the op-ed in The New York Times, but US officials did not support him, saying that such a revelation must be backed by multiple intelligence agencies, not just one person, according to Newsweek.

"An op-ed doesn’t have the same stature, it comes from one person," a source told the news magazine describing the White House response to Comey’s proposal.

Russia ‘Hack’ of US Elections an ‘Act of War’ — Dick Cheney
On March 20, Comey confirmed that the FBI was conducting a probe into Russia's alleged interference in the 2016 US presidential election.

Chairman of the US Senate Intelligence Committee Richard Burr said on Wednesday that the committee was planning to finish its review of thousands of documents related to the investigation of Russia's alleged interference in the 2016 election within weeks.

Russia has repeatedly denied Washington's claims of its alleged meddling in the election. Kremlin spokesman Dmitry Peskov has stressed that Russia did not cooperate with US President Donald Trump's staff during the 2016 election campaign.