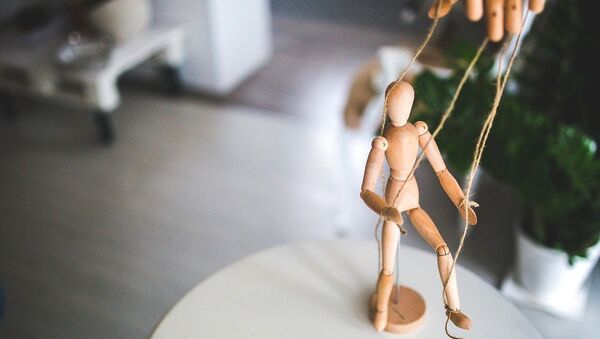 Policymakers in the United States and other Western countries have used political elites in other parts of the world, including the Middle East, to carry out their unsound foreign policy, Sedat Aral, a Turkish journalist who relocated to London, told Sputnik Turkey.

"The West and the United States have cunningly used eastern leaders as puppets on the stage of their theater," he said.

Sedat Aral has been critical of the methods Washington and its allies have employed overseas.

"The West provides weapons to opposition groups in other countries, waits for a civil war to erupt and then supports a certain party in the conflict, branding the other side as terrorists. They used this tactic in approximately 20 conflicts as far as I remember. This is a result of hypocrisy and double standards of the West," he said.

The journalist suggested that policymakers in the United States and other Western countries have been able to carry out such strategies across the globe because media outlets have been largely unable to influence the decision-making process.

US-Sponsored Kurdish State in Syria: Myth or Reality?
"There are no media outlets that could pressure a country's leadership when needed since state-funded TV channels and mainstream media do what authorities want them to do. Take BBC for instance. When the Syrian conflict erupted, many printed media outlets and TV channels in the West nearly worshiped those who they thought 'were spreading democracy' in the Middle East. This is the key reason behind this: TV channels and printed media which are part of state monopoly, as well as media outlets linked to the government, have tried to present policy initiatives to the people in the most favorable light possible," he explained.

Sedat Aral used Turkey to illustrate what this approach could lead to.

"The West has sent weapons to Syria. At some point in time Turkey has become involved in this process. … [As a result] Ankara has become an accomplice of the crimes committed by Western countries [in Syria]. There are many nations like Turkey. The situation which Turkey has found itself in today resembles the one Syria was in the 1970s and Iraq in the 1980s," he asserted.

'Future of Syria and Middle East Depends' on Cooperation Between Russia and Iran
The journalist did not rule out that Turkey may potentially once meet Rwanda's fate as a result of its involvement in the Syrian conflict. He was referring to the International Criminal Tribunal for Rwanda which was established in 1994 to prosecute those responsible for the Rwandan genocide, a mass slaughter of Tutsi by members of the Hutu government.

"Great Britain has kept track of armaments in Turkey's arsenal. The UK is also well aware that Turkey does not have enough military power and financial resources to carry out a war for five or 10 years. This situation cannot but remind me of an action movie where a person is given a gun which someone else later uses to commit a crime. Sadly, countries like Turkey with their tough rhetoric and ill-conceived policies have helped to push events in a similar direction," he said.