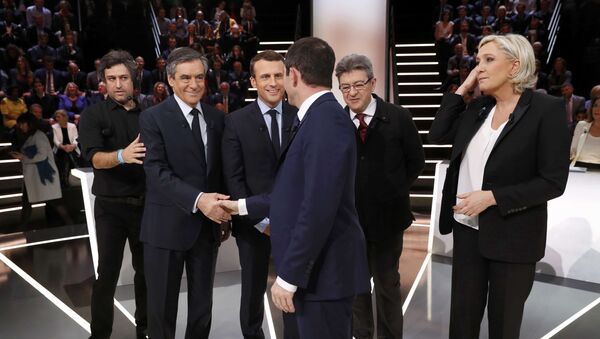 © REUTERS / Patrick Kovarik/Pool
Subscribe
The Franco-Russian Dialogue Association held a meeting on Tuesday, attended by several French presidential candidates or their representatives, which demonstrated that while the candidates may have certain disagreements with Moscow, they are interested in dialogue.

MOSCOW (Sputnik) — Independent Emmanuel Macron turned down the invitation, Nicolas Dhuicq, a French lawmaker who attended the meeting, told Sputnik. Macron said earlier this month that he would not be in favor of a rapprochement with Russia.

He also noted that Fillon knows Russian President Vladimir Putin personally and is aware that the Russian president likes establishing a personal relationship during negotiations.

Poniatowski also emphasized that Fillon believed that the European Union's sanctions on Russia impoverishing French farmers were pointless and should be lifted.

France Says 'No' to Russophobia
Fillon’s spokesperson said that Paris and Moscow must work together to fight terrorism, to develop policy on Iranian nuclear program, to stop NATO enlargement.

Dhuicq told Sputnik that National Front (FN) party leader Marine Le Pen, a supporter of closer ties with Russia, was represented by David Rachline. According to Dhuicq, Rachline was promoting the FN anti-globalism stance, stating the preference for a multipolar equitable world order.

According to Dhuicq, Rachline added that Russia and France had common interests in multiple areas, including the fight against international terrorism, which was raised by Le Pen during her meeting with Russian President Vladimir Putin in Moscow earlier in March.

"Jean-Luc Melenchon wants to build relations of cooperation on science, culture and peace with Russia, whoever is its leader," Kuzmanovic said on his Twitter.

Melenchon's representative also said that the sanctions against Russia had to be lifted to "stop exerting pressure over French producers of milk and fruit."

Le Pen Calls for Sharing Anti-Terrorism Intelligence Between France, Russia
The idea of lifting sanctions was also echoed by Jacques Cheminade, the candidate from Solidarite et Progres (Solidarity and Progress) party, who attended the meeting, He said that lifting the sanctions off Russia could help revive France's struggling agricultural sector, according to Dhuicq.