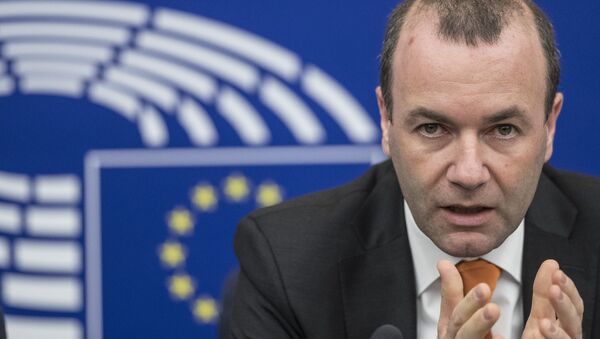 The President of the European People's Party group (EPP Group) in the EU Parliament has said there must be a "clear split" between the EU and the UK, in the upcoming talks on Brexit, beginning with a "divorce" before talks on a new trade agreement can begin - and probably not within the allocated two-year timescale.

Speaking the day before UK Prime Minister Theresa May is set to trigger Article 50 of the Treaty of Lisbon and formally begin Brexit, Manfred Weber — whose EPP group includes the presidents of all three EU institutions, Donald Tusk (Council), Jean-Claude Juncker (Commission) and Antonio Tajani (Parliament) — said the two-year timescale would not be enough to reach a new trade deal.

Under Article 50, there will be a two-year period during which the UK must negotiate with the other 27 member states to discuss how Britain leaves the EU, which obligations it has already committed to and is obliged to honor — which could cost up to US$65 billion —before discussing a new trade agreement with the bloc.

"Hopefully tomorrow (March 29) we will hear what London wants [out of the Brexit talks]. We respect the majority of the British voters who decided to leave the EU, but it's allowed for us to underline that this is an historic mistake," he told a news conference, March 28.

"We expect that there will be a clear split between the first phase — the divorce — the split and then the second step [will be a discussion over] the new relationship. That is, from our point of view, a two-step approach, otherwise we would mix up everything and that would complicate all the procedures," he said.

However, when asked about the timescale — a two-year negotiating window, as commanded by Article 50 — he said he doubted a new trade deal could be reached within the time, since much of the talks would be taken up with the 'divorce' deal.

"I don't think that this is possible to manage both things. Please bear in mind that all our trade deals we have done in the past with external countries — and Great Britain will be a third-party country — took years to negotiate. So I don't think so. We will talk about a transitional period [a period of years during which Britain gradually leaves the EU and establishes a new trade deal]," he said.

How fast can #Brexit happen? Who are the key players involved? Here is a possible timeline for the UK leaving the EU. #eppgroup pic.twitter.com/yDEARKeIky

​"For me, it is clear that in the coming years, Britain has to respect all its obligations, especially the European Court of Justice, which is fundamental. Anything else would not be respectful behavior that would lead to difficult decisions," he warned.

It is significant that Weber chose to make his remarks, as it will be a clear sign of the thinking of Juncker, Tusk and Tajani, who will all play key roles in the Brexit talks. Weber called on the UK to treat the talks over Brexit "fairly" without any threats to make Britain a new tax haven to win big business.

"We ask the British to behave fairly during the negotiations. All the messages we hear, for example, on a tax haven — a 'Singapore next to Europe' — or on social dumping [reducing labor costs using illegal and exploitative practices] are not creating an atmosphere of fairness or trustful partnership. So we are asking them to behave in the fair manner.

Celebrating #EU60 we take a look back and a look forward through the eyes of #eppgroup Chairman @ManfredWeber pic.twitter.com/U3BEvm4fW8

​"The top priorities are citizenship — it is on both sides' interest to immediately clarify this point [on the future rights of EU workers currently in the UK and of UK citizens currently in other EU states]. I hope that Theresa May can give a clear signal that she does not want any more uncertainty for the 4.4 million EU citizens in Great Britain and British citizens in the EU and clarify their legal status immediately."

"The second point is about the cost of the exercise. There are figures on the table, but we don't want to speculate and the bill [for leaving the EU] has to be clarified and we want a positive progress. It will be very costly for the British," he said.

"The third point is the special situation in Northern Ireland. We regret there is a need to talk about the Good Friday agreement and the peace process that has achieved so much in the last decades. Now the debate about peace is back. That is what we regret, but it's back. That's why we have to find a solution where we can avoid having a border between Northern Ireland [which would be outside the EU] and Ireland [which will remain in the EU]," Weber said.