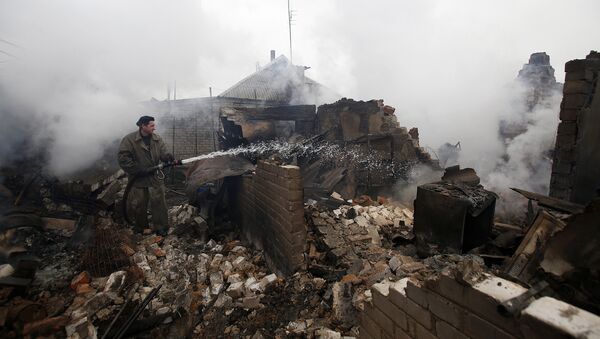 "As a result… a civilian died, nine people were injured," Petrenko said of the shelling that damaged or destroyed over 50 civilian infrastructure, including houses.

Lavrov: Europe Should Make Kiev Implement Minsk Accords
She specified that the case was opened under the Russian Criminal Code's article on the use of means and methods of warfare banned by Russia's international treaty in a military conflict.

Also, the Russian Investigative Committee launched criminal cases against Ukrainian armed forces members for their role in the shelling of civilians in Donbass.

More than 20 houses in various parts of the city of Donetsk were damaged or destroyed as a result, and 20 civilians injured, she said.

Kiev 'on Verge of Losing Donetsk and Lugansk' With Donbass Blockade
The Donbass conflict erupted in April 2014 as a local counter-reaction to the West-sponsored Maidan coup in Kiev that had toppled President Viktor Yanukovych in February. Residents of the Donetsk and Lugansk regions held independence referendums and proclaimed the People's Republics of Donetsk and Lugansk. Kiev has since been conducting a military operation, encountering stiff local resistance.

000000
Popular comments
The investigation should also include NATO/CIA's obvious involvement in this senseless terrorism against civilians, since it is both well documented and also the only chance these cowards will ever have to shoot a Russian and getting away with it.