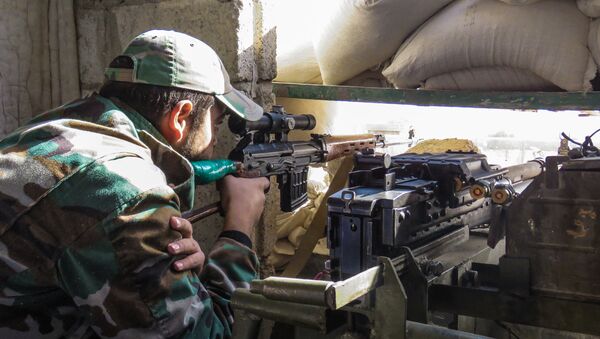 According to a military source, Syrian army backed by militia pushed out Jabhat Fatah al Sham (former Nusra Front, outlawed in Russia) terrorists from the village of Kokab in the Syrian province of Hama.

"[Government forces] are continuing the offensive on several fronts north of the city of Hama. The intensive battles with the militants from the Jabhat al-Nusra and allied groups are taking place there at the moment," the source said.

The source added that during the clashes Syrian army managed to kill many terrorists and destroy their command post, warehouses of weapons and ammunition, as well as four tanks, six armored personnel carriers and nine vehicles with machine guns mounted on them.

The nationwide Syrian ceasefire regime was introduced on December 30, 2016, with Russia and Turkey as its guarantors. The ceasefire excludes the Islamic State and Nusra Front terrorist groups (both outlawed in Russia), as well as other organizations considered terrorist by the UN Security Council.