Keystone is a Go! State Dept to Give Final Approval on Controversial Pipeline 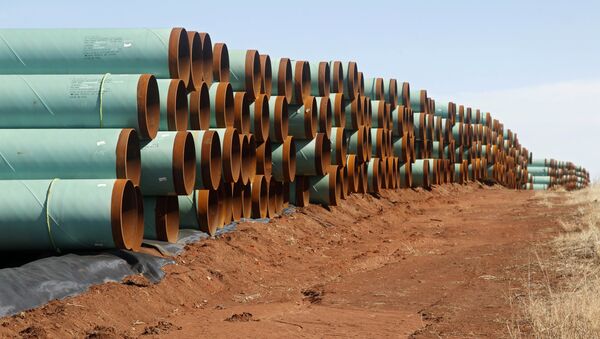 © AP Photo / Sue Ogrocki
Subscribe
The announcement of the approval of the pipeline comes 16 months after former President Barack Obama blocked the project from continuing.

Standing Rock Sioux Tribe Chairman Says Battle Against Dakota Access to Continue
Four days after his inauguration, President Donald Trump signed four executive orders aimed at speeding up the completion of the Keystone XL pipeline, the Dakota Access pipeline and other infrastructure projects. He ordered that a permit to complete Keystone XL be issued within 60 days, a time limit which ends on Monday.

The 1,200-mile TransCanada pipeline will deliver crude oil from Canada to the US Gulf Coast. The project is expected to cost $8 billion, and the company has been seeking to build it for almost 10 years.

It has been a heated point of debate for nearly six years, as Democrats point to oil spill risks that could be devastating for the environment. There have been more than 750 protests against the project since 2011.

According to proposals, the pipeline will carry 800,000 barrels of carbon-heavy tar sands oil across the Canadian border to the United States every single day.

Under Threat of Arrest, Dakota Access Pipeline Protesters Departing (PHOTOS)
Republicans insist that it will create jobs and be great for the economy, and Trump has repeatedly claimed that he will require TransCanada to use materials made in the US to complete the infrastructure project.

“If people want to build pipelines in the United States, they should use American steel and they should build it and create it right here,” Trump said at a rally on March 20. “That pipeline is going to be manufactured right here.”

While the pipeline will have the stamp of approval from the White House, the Trump administration will still need to seek approval from the Nebraska Public Service Commission before the project can be constructed in the state. The commission is not expected to make their decision until late September, Politico reported, and many landowners in the state have refused to provide the company access.