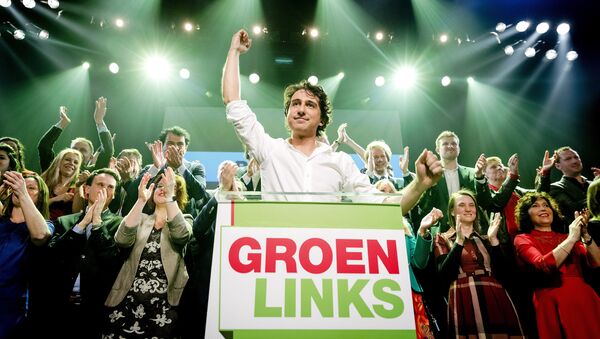 © AFP 2022 / Robin van Lonkhuijsen / ANP
Subscribe
A member of the right-wing Belgian Vlaams Belang (Flemish Interest) party, Bart Claes, said that GreenLeft success in the Dutch election is an example of the new political division, there will no longer be a classical division between a left and right.

VVD Party Wins Dutch Election Only Due to Turkish Rally Ban Ploy – Belgian Party
MOSCOW (Sputnik) — The Dutch GreenLeft party's success in general election, that saw them win many seats in parliament, is a reflection of shift from political division on left and right to division on globalism, a member of the right-wing Belgian Vlaams Belang (Flemish Interest) party, Bart Claes, told Sputnik.

Dutch GreenLeft party led by Jesse Klaver greatly increased the number of its seats in the parliament from four to 14 and became the largest left-wing party in the Dutch parliament for the first time. Dutch Prime Minister Mark Rutte’s ruling center-right People's Party for Freedom and Democracy (VVD) won election with 33 out of 150 parliamentary seats. Its main competitor, Geert Wilders' far-right Party for Freedom (PVV), took the second place and increased its presence in the parliament from 15 seats to 20.

EU Should Heed Right-Wing Parties Despite PVV Defeat in Dutch Elections
The GreenLeft party has always supported deeper integration of the Netherlands with the European Union. Among the party’s proposals giving more power to the European Parliament to make the European Union more democratic. Klaver also declared his strong commitment to the European bloc as it ensures multinational citizens pay taxes in their country of residence.

Two striking examples of the strong backlash against open markets and borders in 2016 were the Brexit referendum in June in the United Kingdom and the victory of Donald Trump in the US presidential election in November. Results in both cases reflect voters deep dissatisfaction with the consequences of globalization in mainstream political parties.

Parliamentary elections will be held in numerous European countries in 2017 including France, Germany, Norway and the Czech Republic. Additionally, the future president of France and the chancellor of Germany are to be elected this year.