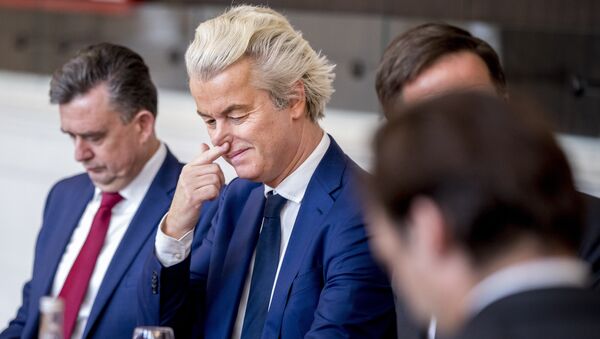 Georg Niedermuhlbichler, the secretary of the ruling Social Democratic Party of Austria (SPO) said that the European Union still had to be alerted because of the rise of right-wing populists and needs internal discussion to defeat them on an argument base.

Dutch Far-Right PVV 2nd in Election With 33% of Votes Behind Ruling VVD
MOSCOW (Sputnik) — Despite the Dutch far-right Party for Freedom's (PVV) failure to win the general election in the country, the European Union should take right-wing parties into account and treat them very seriously, Georg Niedermuhlbichler, the secretary of the ruling Social Democratic Party of Austria (SPO), told Sputnik.

The right-wing PVV, under the leadership of Geert Wilders, became the second in the Dutch elections, increasing its presence in the parliament from 15 to 20 seats. The PVV's main competitor incumbent Dutch Prime Minister Mark Rutte’s center-right People's Party for Freedom and Democracy (VVD) became the election's leader, securing 33 out of 150 parliamentary seats.

"Wilders couldn’t fulfill the high expectations, however, the Dutch result cannot be interpreted as a motive to lean back or to think that the right populists are downfalling. As an anti-European movement, the right populists have to be taken very seriously for sure," Niedermuhlbichler said.

Welfare Concerns, Not Xenophobia Behind Rise of Right-Wing Populism in Europe
He added that the European Union still had to be alerted because of the rise of right-wing populists and needs internal discussion to defeat them on an argument base.

The PVV, well known for its anti-migrant and anti-Islamic sentiment and prioritizing national interests, was the front-runner of the election race for weeks. Rutte's VVD managed to take the lead only in the last days before the elections. The PVV platform includes proposals to close all the mosques in the Netherlands, ban the Quran, the country’s withdrawal from the European Union, the cutting of income tax and greater defense spending without any extra cost for the citizens.

Far-right and euroskeptic parties in Europe have gained momentum over the recent years, as the EU economy has been burdened with costs associated with the ongoing migrant crisis.