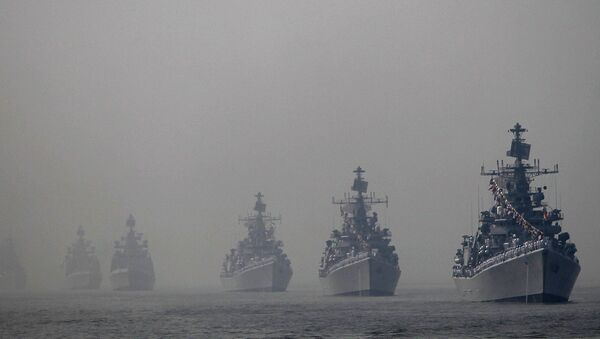 Indian Navy Gets Jet Attack Craft to Take On Maritime Terrorists, Pirates
New Delhi (Sputnik) –  The inordinate delay in procurement will leave the Indian Navy, the world’s fifth largest, without minesweepers which are essential for ships to detect, track and destroy mines laid by enemy forces to choke harbors and spread mayhem. This startling revelation came to light when the Indian government accepted before a parliamentary committee that all six mine counter-measure vehicles (MCMVs) currently operational in the Navy will be retired by 2018.

India had bought six MCMVs from the erstwhile Soviet Union in the 1970s. Last year, the Indian government agreed to build 12 new MCMVs with the South Korean collaboration at Goa Shipyard.

“The Ministry of Defense has informed that in respect of MCMVs, the last bid was submitted by South Korean company Kangnam Corporation on January 11, 2016. Even after a passage of almost a year, no decision could be taken on the matter. The MCMVs are slated for de-induction by 2016-2018. 2016 has already passed and moreover, building the MCMVs will also take considerable time,” read a report submitted by the parliamentary committee on defense.

The $4.9 billion-deal with Kangnam Corporation was supposed to be inked with Goa Shipyard last year itself under transfer of technology agreement. India was expecting the delivery of the first MCMVs in 2021 but it may get further delayed due to technology transfer negotiation yet to be completed between India and the South Korean company. “The committee feels that the entire process of procurement of MCMVs will be delayed inordinately. Therefore, the committee desires that sincere and concerted efforts must be made with urgency to resolve the situation,” the committee noted. This means that the Indian Navy will have to cope without any MCMVs for more than three years.

The Indian Navy needs at least 24 MCMVs to plug the shortfall. On the other hand, China has more than 100 minesweepers and MCMVs.