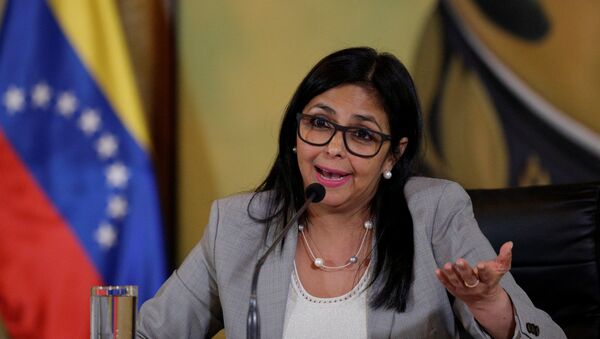 © REUTERS / Marco Bello
Subscribe
Venezuelan Foreign Minister Delcy Rodriguez has called Brazil a country that is "the shame of the world" during the Hugo Chavez Anti-Imperialist Forum in Caracas due to the state's ongoing corruption and political scandals.

"Today, we should say that unfortunately Brazil is the shame of the world. Every day its politicians get involved in scandals since the moment when they staged a coup against Dilma Rousseff," Rodriguez said on Monday, as quoted by the Nacional news portal.

All Brazilian politicians are corrupt, and there will be new disclosures, Rodriguez added, pointing out that the "right-wing imperialist" forces are condoning corruption.

Brazil Impeachment Mastermind Arrested for Corruption
Earlier on Monday, Rodriguez commented on a statement by Kuczynski, who compared Latin America with a "nice dog, making no problems to the United States," while he was on a US visit.

"Mr Kuczynski, you are a coward and the only nice dog serving to the North American imperialism," the Venezuelan foreign minister stated.

The remarks by Rodriguez caused an outcry in Peru with the country’s Foreign Ministry recalling its ambassador to Venezuela for consultations. The Peruvian ministry also voiced a protest and non-acceptance of such remarks about the nation’s leader.