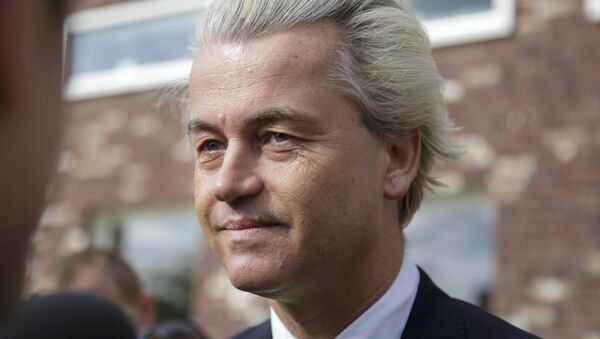 © AP Photo / Phil Nijhuis
Subscribe
On March 15, Dutch voters will go to the polls to vote in a general election that is being watched with interest due to the popularity of Eurosceptic candidate Geert Wilders. In an interview with Sputnik Germany, Dutch political expert Andre Krouwel commented on the upcoming election and explained the reasons behind Wilders' popularity.

"We analyzed which topics dominate the media, and we can quite clearly say that these are immigration, integration, refugees, security and terrorism. Interesting is that these topics determine the political agenda despite the fact that the country has stayed away from major terrorist attacks. This is due to an obsessive attention that is being paid to Geert Wilders," the expert stated.

According to the expert, Wilders' election campaign is very similar to that of Donald Trump. He talks to people directly and focuses on the issues that really concern the majority of the public.

"He uses Twitter and communicates directly with the voters. In this way he dominates the news, representing half of the content the media are writing about," Krouwel told Sputnik Germany. "Moreover, people really think that there are too many immigrants. They believe that it is necessary to close the border."

'Wilders Won't Win:' Dutch Professor Predicts Outcome of Tight Election Contest
At the same time, Wilders is being supported not only by the "protest electorate," although his election program can probably fit on one sheet of A4 format paper, the expert argued.

"For example, there are people who face competition from labor migrants from Eastern Europe in the lower segment of the labor market — Bulgarians, Romanians, Poles, who have come here in search of a job. Others are unhappy, because they perceive the culture of migrants as completely foreign to their own, and they feel that their environment no longer gives them a sense of security," Krouwel noted.

In Krouwel's opinion, the political landscape in many European countries is rapidly changing. Many things that one couldn't imagine a couple of years ago have become a reality now.

"If five or ten years ago you would say — let's get out of the EU — you would be shot down in flames. Now, when it came to Brexit, this suddenly became a reality. The victory of Donald Trump in the US election showed that a politician who opposes migration and stands against the establishment can gain an upper hand over this establishment. It inspires courage and gives political oxygen to those who want to get rid of the establishment and the entire elite," the expert concluded.

Dutch Election Frontrunner Wilders Suspends Campaign After Security Detail Leak
Until recently, Wilders' anti-immigration Party for Freedom (PVV) had lead in opinion polls ahead of the March 15 election, though the BBC notes that his major rival, Prime Minister Mark Rutte, has been cutting into his lead in recent weeks.

Unlike countries such as Germany, or Russia, which require a party to get 5 percent of the popular vote to qualify for parliamentary seats, the Dutch system simply divides the number of votes by the number of seats in the House of Representatives. So, in order to be allocated one of the 150 seats, a Dutch political party needs to get a mere 0.67 percent of the public vote.