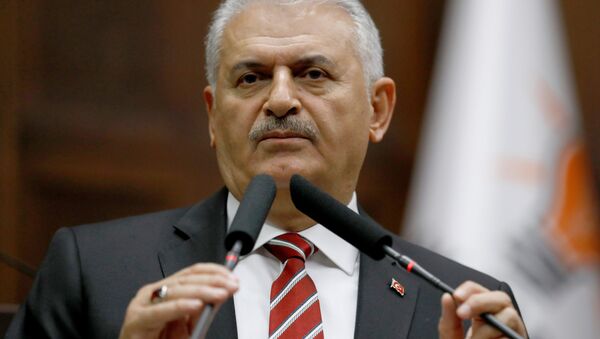 © REUTERS / Umit Bektas
Subscribe
Turkish and German foreign ministers will meet next week amid the disagreement triggered by the recent restrictions and bans on Turkish rallies in Germany, Turkey's Prime Minister Binali Yildirim said after a phone talk with German Chancellor Angela Merkel on Saturday.

Turkish Foreign Minister Defies Dutch Ban on Rotterdam Rally
MOSCOW (Sputnik) — On Thursday, the authorities of the southwest German city of Gaggenau withdrew the permission for Turkish Justice Minister Bekir Bozdag to address locally residing Turkish citizens in light of the upcoming referendum on constitutional amendments, which will expand the powers of Turkey's President Recep Tayyip Erdogan. Another event in Cologne, where Turkish Economy Minister Nihat Zeybecki was expected to speak on Sunday, was also canceled amid security concerns.

"With Merkel I talked about the recently imposed restrictions and bans in Germany on [Turkish] rallies in the light of the upcoming referendum. For the next programs we will find a different approach. In the upcoming week the foreign ministers of both countries will meet to clarify this issue," Yildirim was quoted as saying by the NTV broadcaster.

The cancellations have provoked a negative reaction in Ankara, with Erdogan as well as other top officials accusing Germany of interfering in Turkey's internal affairs.

Relations between Ankara and Berlin have seriously deteriorated against the backdrop of Germany's criticism toward ongoing purges in Turkey after the July 2016 coup attempt. A new wave of criticism was triggered after Turkish authorities arrested Turkish-German journalist Deniz Yucel over alleged participation in a terror organization, misuse of data as well as terrorist propaganda.