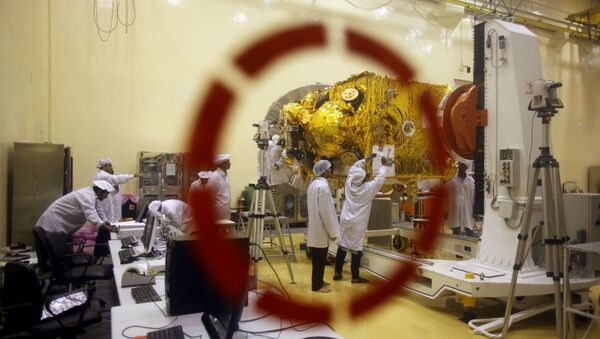 © AP Photo / Aijaz Rahi
Subscribe
ISRO boss AS Kiran Kumar says the second lunar mission Chandrayaan 2 is making good progress; it is scheduled for launch next year. But critics question why should India get into the manned spaceflight race when the US and Russia have scaled back.

"ISRO will develop an engine that will help in the controlled landing on the moon. The mission is currently planned for the first quarter of 2018. Scientists have developed an artificial crater to simulate the surface of lunar conditions for landing experiments," he told reporters on the sidelines of the convocation ceremony of Vels University near Chennai, the capital of southern state Tamil Nadu.

Kumar said tests were under way for a controlled landing of the spacecraft on the surface of the moon. A series of ground tests have also been conducted by ISRO scientists at its facility in Mahendragiri, Tirunelveli district, and in Challakere, in Chitradurga district near Bengaluru.

Chandrayaan-2, India's second lunar mission, comprises an Orbiter, Lander and Rover configuration. It is an advanced version of the previous Chandrayaan-1 mission and is planned to be launched as a composite stack into orbit by a GSLV-Mk II, as per information available on the ISRO website.

India Inc. Joins Hands to Bid for Moon Mission
Last week, Kumar had said India had the capability to develop a space station and the country should support it for long-term benefits as against critics' myopic vision for immediate benefits.

Critics question whether India should push for human spaceflight when the US, Russia and others have scaled back and jointly operate an international space station. Though China is ahead in pursuing this dream, ISRO is waiting for a clear roadmap and guidance from the government.

On India's plans for the Venus mission, Kumar said talks were on but nothing's been finalized so far.