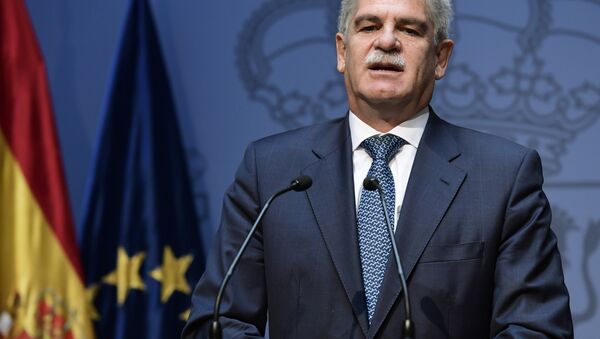 © AFP 2021 / Javier Soriano
Subscribe
Spanish Foreign Minister Alfonso Dastis said that it was difficult to establish a time period for the EU sanctions against Russia lifting.

EU's Russia Sanctions Could Be Lifted Upon Improved Russia-US Ties - Hungary FM
GENEVA (Sputnik) — Anti-Russia sanctions will be lifted once the Minsk accords are fulfilled but there is no progress on the issue so far, Spanish Foreign Minister Alfonso Dastis told Sputnik on Tuesday.

"The EU sanctions against Russia may be lifted when the conditions for this purpose are met, that is, when a significant progress in the implementation of the Minsk agreements is achieved," Dastis said.

He added that it was difficult to establish a time period for the sanctions lifting.

"We are talking about particular actions and results, this depends on the work which is being carried out by Russia, Ukraine, France and Germany in the Normandy Format and sadly there have been no big progress so far," Dastis said.

EU to Remain United on Anti-Russia Sanctions, Hopes US to Be United as Well
Speaking about the possibility of expanding the European sanctions against Russia, the minister said that it was more important to remove them, but there was no significant progress in that respect, either.

The Minsk agreements, struck in February 2015 and brokered by Russia, France, Germany and Ukraine, stipulate ceasefire in southeastern Ukraine, where Kiev forces and self-proclaimed Donetsk and Lugansk people republics' militia have been clashing since 2014, when the two regions refused to recognize the new Ukrainian government that came to power in what they perceive to be a coup. The sides to the conflict continue to exchange fire, despite the ceasefire deal.

In 2014, Brussels imposed anti-Russia sanctions over Moscow's alleged involvement in the crisis in Ukraine, repeatedly denied by the Russian authorities.

000000
Popular comments
will never be implemented. Why would the Ukro fascist regime do it anyway? If so, the illogical sanctions against Russia will have to be removed. Here there's only 1 solution, the use of brutal force, the only language understood by the neo nazi's and their patrons in the west.

md74
28 February 2017, 13:12 GMT1
000000
Ukraine have confirmed they have no reason to abide by the treaty. Now why aren't the guarentors Merkel and Hollande held to account, in the same way that the other guarantor, President Putin, is blamed for Kiev not abiding by the agreement. When will the politicians actually bother reading the Agreement and realise that Russia is only a guarantor and has nothing to do with the civil war in Unkraine. It is not rocket science, now is it?
anne00marie
28 February 2017, 13:35 GMT1
000000
Newsfeed
0
New firstOld first
loader
LIVE
Заголовок открываемого материала
Access to the chat has been blocked for violating the rules . You will be able to participate again through:∞. If you do not agree with the blocking, please use the feedback form
The discussion is closed. You can participate in the discussion within 24 hours after the publication of the article.
To participate in the discussion
log in or register
loader
Chats
Заголовок открываемого материала
Worldwide
InternationalEnglishEnglishMundoEspañolSpanish
Europe
DeutschlandDeutschGermanFranceFrançaisFrenchΕλλάδαΕλληνικάGreekItaliaItalianoItalianČeská republikaČeštinaCzechPolskaPolskiPolishСрбиjаСрпскиSerbianLatvijaLatviešuLatvianLietuvaLietuviųLithuanianMoldovaMoldoveneascăMoldavianБеларусьБеларускiBelarusian
Transcaucasia
ԱրմենիաՀայերենArmenianАҧсныАҧсышәалаAbkhazХуссар ИрыстонИронауОssetianსაქართველოქართულიGeorgianAzərbaycanАzərbaycancaAzerbaijani
Middle East
Sputnik عربيArabicArabicTürkiyeTürkçeTurkishSputnik ایرانPersianPersianSputnik افغانستانDariDari
Central Asia
ҚазақстанҚазақ тіліKazakhКыргызстанКыргызчаKyrgyzOʻzbekistonЎзбекчаUzbekТоҷикистонТоҷикӣTajik
East & Southeast Asia
Việt NamTiếng ViệtVietnamese日本日本語Japanese俄罗斯卫星通讯社中文（简体）Chinese (simplified)俄罗斯卫星通讯社中文（繁体）Chinese (traditional)
South America
BrasilPortuguêsPortuguese
NewsfeedBreaking
17:31 GMTTaliban Fighters Seen Riding Swan-Shaped Pedal Boats - Photo
17:23 GMTTexas: Military Plane Crashes in Lake Worth Residential Area, ‘Heavily Damaging Two Homes’
17:10 GMTDaesh Claims Responsibility For Attacks in Eastern Afghanistan
17:03 GMT800+ Naked Swimmers Celebrate Approach of England's Autumn Equinox
16:52 GMTUS National Whelan Tells Family About Physical Assault in Russian Prison
16:37 GMTDems Reportedly Mulling Ploy to Defuse Debt Ceiling Stand-off with GOP to Avert Gov't Shutdown
16:30 GMTHeart-Stopping Moment: Divers in Brazil Come Face-To-Face With Giant Anaconda
16:23 GMTEU Greens Co-leader Threatens to Turn Nord Stream 2 Into ‘Investment Ruin’
16:22 GMTUK's New Foreign Secretary Heads to US on First Foreign Visit
15:58 GMTHindu Man Thrashed by Thugs for Travelling With Muslim Woman in India's Bengaluru - Video
15:53 GMTRonaldo Supports Coma-Stricken Player: 'Get Well Soon My Friend'
15:29 GMTBoxer Manny Pacquiao to Run for Philippine President in 2022 Election
15:16 GMTCharanjit Singh Channi to be Next Chief of Punjab, Says India's Congress Party
15:04 GMTIran’s President Hails Entry Into China, Russia-led Economic & Security Pact as ‘Diplomatic Success’
14:59 GMTStreaming Giant Netflix Tipped to Score Big Time at Live 2021 Primetime Emmy Awards
14:20 GMTSpanish Canary Island of La Palma Rocked by Volcanic Eruption - Videos
14:12 GMTFrance Denies Cancelling Summit With Swiss President Over Jet Ordering Debacle
13:41 GMTTwo Libyan Helicopters of Haftar's LNA Collide at Drills Near Benghazi, 2 Killed,Source Says
13:40 GMT'Two Steps Forward': Pele's Daughter Shares Details on Iconic Player's Condition After Surgery
13:35 GMTSafety First! US Reportedly Frees Daesh Fighters From Prison in Syria, Jabs Them With Covid Vaccines