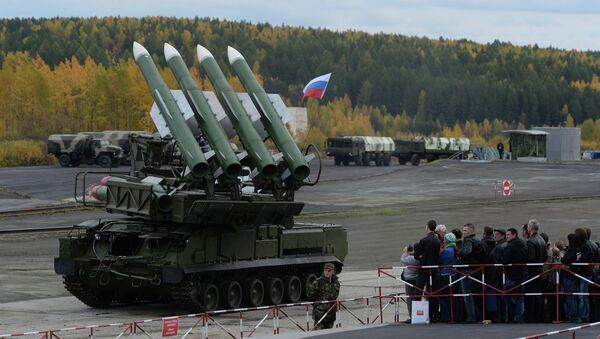 © Sputnik / Pavel Lisitsyn
/
Go to the photo bank
Subscribe
The Russian Navy will deploy batteries of BUK missiles in Crimea to protect its surface ships and submarines against drones and cruise missiles to beef up anti-access/area-denial capabilities around the Black Sea peninsula, the newspaper Izvestia wrote.

Military experts believe that the BUKs, along with the S-300 and S-400 missile systems already stationed in Crimea will effectively secure the airspace over the peninsula and the Black Sea.

Russian Troops Receive Three Advanced Buk Missile Systems
The 1096th air defense regiment, based in Sevastopol, will receive an initial batch of BUK-M2 missiles with more advanced BUK-M3s to arrive at a later date, officials at the Black Sea Fleet headquarters told the newspaper without elaborating.

The BUK-M2 is capable of shooting down planes and UAVs 3 to 45 kilometers away, cruise and ballistic missiles up to 20 kilometers away and even high-altitude strategic spy planes flying at an altitude of up to 25 kilometers.

The Osa missile system has a maximum horizontal range of 10 kilometers and a vertical rage of just over 5 kilometers.

The 51st division of the Russian Airspace Forces also deployed in Crimea, is armed with S-300 and S-400 missiles and Pantsir combined short to medium range surface-to-air missile and anti-aircraft artillery weapon systems.

“The 1096th regiment will protect the Black Sea Fleet’s ground facilities and ships. Together, these units can provide multilayered defense of both Crimea and the entire Black Sea against high-tech enemy attacks,” he added.

Batteries of BUK missiles guarded the airspace over Sochi and surrounding areas during the 2014 Winter Olympics.

Russian concerns stemmed from the fact that Ukraine's military has already had the unfortunate experience in of accidentally shooting down civilian airliners.

Safe Skies: New Buk-M2 Missile Brigade Enters Combat Duty in Southern Russia
In 2001, a Ukrainian air defense S-200 missile battery shot down a Russian Tu-154 which was on route to Siberia from Israel over the Black Sea during a training exercise, killing all 78 passengers and crew onboard.

During December's drills, Moscow repeatedly called Kiev's missile launches in the Black Sea a “provocation,”, and a threat to the safety of Russian civilian flights to Crimea.

On March 18, Russia will be celebrating the third anniversary of Crimea’s reunification with the country.

On March 16, 2014, 96 percent of Crimean residents voted in a referendum to secede from Ukraine and join Russia.