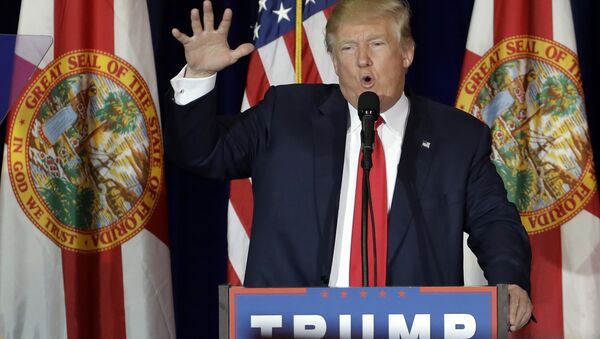 © AP Photo / Chris O'Meara
Subscribe
On Thursday, United States President Donald Trump said that key strategic agreements between the US and Russia are not profitable for Washington.

Washington Not to Yield Nuclear Arsenal Supremacy ‘to Anybody’
The President referred to the New Strategic Arms Reduction Treaty (START) and the Intermediate-Range Nuclear Forces Treaty (INF Treaty), two major strategic deals started back in the Cold War era.

A world without nukes would be "wonderful, a dream," the President said. "But if countries are going to have nukes, we’re going to be at the top of the pack."

During the interview, Trump also said that the New START was a "one-sided deal."

"Just another bad deal that the country made, whether it’s START, whether it’s the Iran deal…we’re going to start making good deals," he stated.

Konstantin Kosachev, chairman of the Russian upper house of parliament's foreign affairs committee, commented on Trump’s remark, saying that it raises serious concerns about the future of US-Russia relations.

"Perhaps, it’s been the most alarming statement by Trump on relations with Russia. […] The New START is based on absolute parity in nuclear arsenals. It is aimed at preventing each of the sides from 'being at the top of the pack' in nuclear capabilities. This is the only way to provide global strategic security," Kosachev wrote in a Facebook post.

Furthermore, Trump said he hopes to discuss alleged violations of the INF Treaty by Russia during his future meeting with President Vladimir Putin.

"To me it's a big deal," the US President underscored. Asked if he would raise the issue with Putin, Trump said he would do so "if and when we meet."

The 1987 INF Treaty prohibits development, testing or fielding of ground-based cruise missile with a range of 300 to 3,400 miles. The treaty was implemented by 1991 with inspections carrying on until 2001.

Mikhail Ulyanov, director of the Russian Foreign Ministry’s Department for Non-Proliferation and Arms Control, told Sputnik that the allegations against Moscow are groundless.

Ulyanov noted that during the presidency of Barack Obama Moscow repeatedly demanded the US State Department to provide "concrete facts proving such allegations," but the American side did not respond, dodging Russia’s claims to Washington on the implementation of the deal.

Kremlin: Russia Not Officially Accused of Violating INF Treaty
The official stressed that Moscow will continue to seek an "adequate response" from Washington.

In an earlier interview, Ulyanov outlined Russia’s stance on dialogue with the US on the agreement, saying that Moscow would wait until Washington’s approach on the issue takes shape.

"The new US administration should decide on its own what position it will take in this regard. […] The previous administration has not given convincing explanations," Ulyanov told Sputnik.

000000
Popular comments
The terror state Usa with President Trump start to understand there country is going down the drain without making a terror war all over the World !!! Trump is a lout mouth without a vision at all !!!
tobi.gelando
24 February 2017, 11:54 GMT7
000000
Bay of pigs 2 ?. Maybe Khrushchev was bluffing about the bomb fire power back then, but Russia I will tell you now does have enough action to reduce US to dust. Plus if they get into their smelly bunkers it will not be good either .