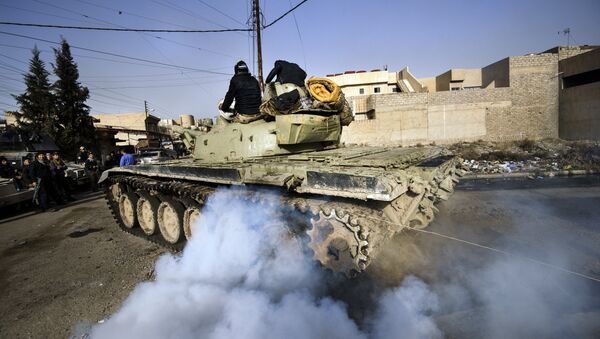 © AFP 2023 / Dimitar DILKOFF
Subscribe
International
India
Africa
Commenting on the recent reports of the first documented Daesh tank attack against the Iraqi Popular Mobilization Forces (PMF), Russian defense analyst Vladimir Bogatyrev suggested that the heavy weaponry may not be mere war trophies, and that the jihadists could be acquiring the war machines through some sort of "disgusting criminal racket."

Daesh Launches First Ever Tank Attack on Iraqi Militia, but Gets Crushed
On Monday, the Iraqi Popular Mobilization Forces (PMF) reported that the Daesh militants used tanks in their attack against them in northern Iraqi Sinjar mountains near the border with Syria.

"The attack, which targeted militia's units in Ain Talaui, Ain al-Hasan, Ash sharai, was launched by 200 members of Daesh, 50 of whom has been eliminated. During the attack, Daesh used tanks which have become the first [documented] case of use of such weaponry by Daesh terrorists," the militia told Al-Manar broadcaster.

The militia added that they managed to repulse the attack destroying 17 mined cars which militants tried to use to breach the defense. 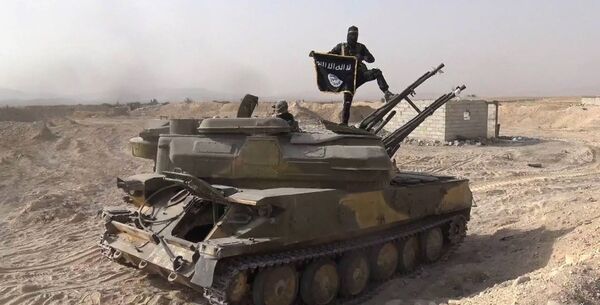 In this file photo released on Aug. 5, 2015, by the Rased News Network a Facebook page affiliated with Islamic State militants, an Islamic State militant holds the group's flag as he stands on a tank they captured from Syrian government forces, in the town of Qaryatain southwest of Palmyra, central Syria
© AP Photo / Rased News Network via AP, File

Russian defense analyst, Chairman of the Board of Directors of the National Association of Unions of Reserve Officers of Russia's Ministry of Defense (MEGAPIR), retired Major-General Vladimir Bogatyrev told Radio Sputnik that if the reports are true, it is yet another proof of how dangerous the terrorists become with such powerful equipment.

"Т-55, Т-62 and Т-72 tanks are very good vehicles even though they date back to the late 1950s. We can see how reliable our military hardware is but we can also see how dangerous it becomes when it gets into such hands," he told Sputnik.

Trump Tells Abadi US Carrying Out Military Buildup of Forces in Iraq
The defense analyst however suggested that it may not be mere war trophies.

"Daesh has overrun vast swathes of territory in northern and western Iraq with many equipment storage bases including those of the heavy weaponry.  No doubts, they could have done it in Syria as well. However it could have been supplied to them by some vendors who are earning huge money on such operations. It is merely a business for them. But it is a dreadful, disgusting criminal racket," the expert told Sputnik.

Vladimir Bogatyrev also noted that in order to completely eliminate the jihadists, various countries should united their efforts.

"Russia, Iran and Turkey have united to settle the crisis on the territory of Syria. But Daesh (Islamic State) and its base is not only vast territories seized in Syria, but it is also Iraq. And the matters are not that well there.  In my opinion, if we could unite efforts with Iraq, Jordan and the US-led coalition, we will be able to solve this crisis relatively quickly.  Without it, it might be going on for a long time," he told Sputnik.