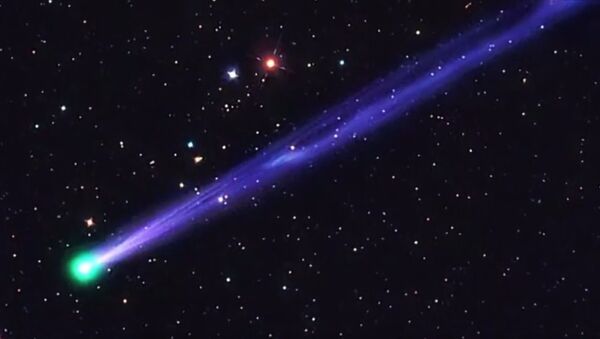 A comet with a strange green coloration will be clearly visible in the night sky between Thursday, February 9, and Sunday, February 12. The green is a result of the presence of diatomic carbon, the gaseous form of graphite.

Comet 45P/Honda-Mrkos-Pajdusakova, named for the trio of astronomers who discovered it in 1948, revolves around the sun every 5.25 years. At its closest approach it will pass 12.43 million km (7.72 million miles) from Earth. This is a stone’s throw by celestial standards, as Mars is never closer than 225 million km from Earth. 45P’s 2016 approach is the eighth-closest comet to Earth since observations began in 1950.

​With binoculars or a telescope, comet-watchers will have no trouble finding the unique comet racing through the sky at 51,000 mph. From Earth, 45P will appear as a blue-green ball with a fan-like tail.

​"Proximity makes the comet bright despite its small size," said SpaceWeather.com. "Forecasters say 45P could be on the verge of naked eye visibility… when it emerges into the pre-dawn sky later this week."

​In 2015, the similarly green Comet Lovejoy was visible to the naked eye during its approach.