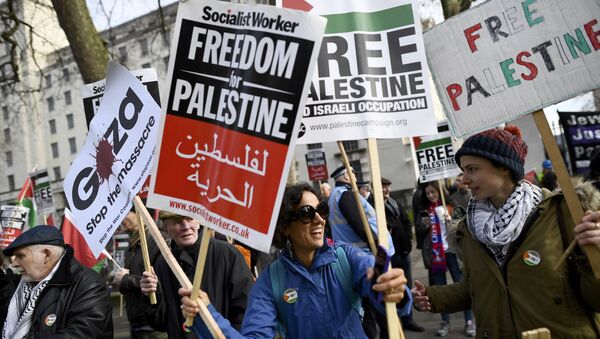 The Palestine Solidarity Campaign on Monday staged a protest to decry the visit of Israeli Prime Minister Benjamin Netanyahu to the United Kingdom to have talks with Prime Minister Theresa May.

Netanyahu Sees Trump Presidency as a Chance to Do Whatever He Wants in Palestine
MOSCOW (Sputnik) — Other organizations including Friends of Al-Aqsa, Muslim Association of Britain, Palestinian Forum in Britain, Stop the War Coalition and War on Want will also participate in the event.

The protesters are calling Netanyahu a war criminal and saying that the visit marks "50 years since Israel’s illegal occupation of Gaza, the West Bank and East Jerusalem."

Almost 300 people have confirmed their attendance through the protest Facebook page.