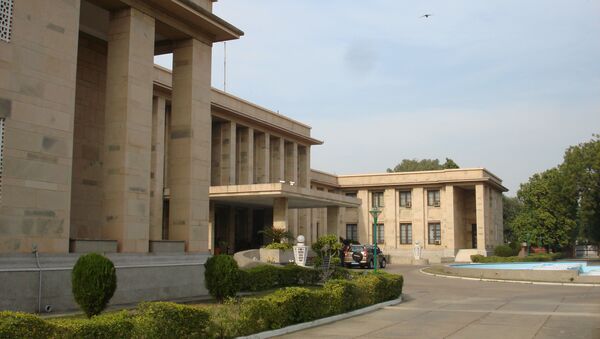 A Hindu group staged a protest outside Russian embassy in New Delhi demanding protection of religious rights of Hindus in Russia.

Bullfighting Ban in India Lifted After Widespread Protests, Clashes With Police
New Delhi (Sputnik) — Some 250 to 300 peoples related to a Hindu group protested outside the Russian embassy on Friday.

Protesters carried placards saying ‘Save Hindus in Russia' and shouted slogans in support of Hinduism. The protest was peaceful.

The protest was organised by the Hindu groups at the behest of Prasun Prakash, son of Prakash Dham who runs an Indian cultural and spiritual center in Russia called ‘Shri Prakash Dham'. Prakash Dham has been threatened by a Russian Alexander Dworkin and his family has also written to Russian President Putin for help.

Prasun Prakash, son of Prakash Dham told Sputnik in an exclusive interview "We want diplomatic talks on this issue between Indian and Russian government due the extremism against Hinduism in Russia."

"Due to the fact is that my father is living in Russia for a long time and he has huge popularity because he works for Hinduism. He preaches Hinduism in various cities of Russia. He is facing threat from the person called Alexander Dworkin. Dworkin calls himself religious expert but his job is to attack every religion and my father is being used as a tool to attack Hinduism. His motive is to threat my father, my family." added Prasun Prakash.

Clashes Between Police, Protesters in India Leave Two Dead, Several Injured
"The fact is that we don't have problems with Russian government, we have problem with this individual person because this person does his works covertly. In fact, I have written a letter to Russian President Putin to help in this matter. We have got reply from the Administration of President in which it was assured that Russian Interior Ministry will enquire the matter and help," Said Prasun Prakash.

Sources in the Russian embassy confirmed Sputnik that, "Some peoples came near the Embassy, they were carrying posters saying ‘Protect Our Rights'. But I don't know what they wanted. They were shouting slogans that religious rights of Hindus living in Russia should be protected. But we don't have any information about insecurity of Indians there. I think there is an organization who is trying to blow the issue out of proportion. The protesters didn't give any letter to the embassy about their demands."

The Hindu group also burned the effigy of Alexander Dworkin at the Ramlila Groud earlier today as he is alleged to have threatening Hindus in Russia.