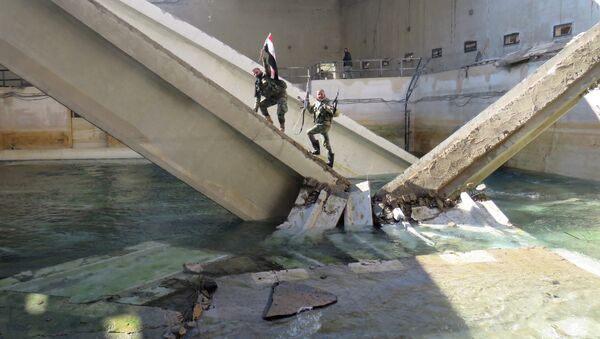 © AFP 2021 / STRINGER
Subscribe
Syrian Minister of Water Resources Nabil al Hasan spoke to Sputnik about the condition of the water source called Ain el Fijeh in Damascus, which provided many people with water and later on was hit by the terrorists.

Syrian Army Retakes Vital Source of Freshwater Near Damascus
“After a full examination of the source we came to a conclusion that 85% of the buildings above the source such as the water pumping station, equipment and power grids are all damaged. The terrorists blew it up in three different places so the source Harush is completely destroyed now,” Hasan said.

The minister further said that the water was allowed to flow through the river channel until the water supply resumed its work.

Later on, about 10 hours after the initiation of the repair, the pumps started pumping water into the water storage of Damascus.

The water samples were then taken for quality analysis. After the results come back, it will be decided whether to supply the water to the residents.

“The battle took place at night. The snipers were shooting at us from every side possible,” Hariri said.

“From January 1 to 23 about 50 soldiers, including myself, took a position in the house opposite the source. The distance between us and the source did not exceed 100 meters. The militants using megaphones, constantly threatened us, saying that they will destroy the entire station,” the soldier said.

According to him the Syrian soldiers started the operation from the mountains. They used an infrared camera to determine the militants’ positions.

“We went for the terrorists from both the sides: by rail and along the buildings. We managed to divert their attention and destroy their united front,” Hariri said.

The terrorists tried to mine the water source to blow it up completely but the soldiers firmly occupied the station and courageously guarded it.

After winning the battle, the soldiers found a lot of weapons such as sniper rifles and bombs, made in Israel in the terrorists’ weapon arsenals.

In December 2016, militants from Jabhat Fatah Al-Sham, formerly known as the al-Nusra Front, blew up a water pipeline in the Wadi Barada area and seized the only source of drinking water for Damascus citizens.

In January 2017, the Syrian army fully liberated the Wadi Barada area near the Syrian capital of Damascus, where the main water source is located, from militants.