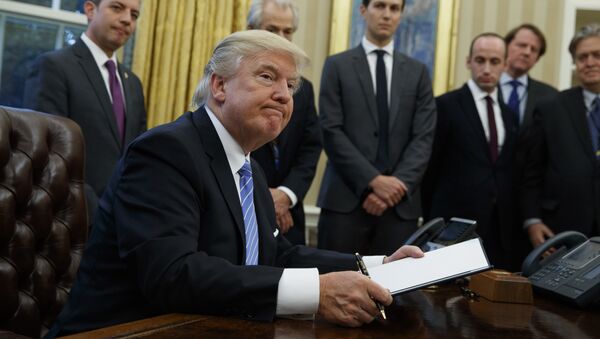 As Protests Rage, Trump Says Travel Bans 'Working Out Very Nicely'
Malala Yousafzai, a Pakistani-born female activist who wrote a blog for BBC about a life under Taliban rule when she was 11 and is the youngest person ever to receive a Nobel Peace Prize, expressed concern about executive order that will ban entry for people from Syria and six other countries to the US in a post on her Malala Fund's Facebook page.

"I am heartbroken that today President Trump is closing the door on children, mothers and fathers fleeing violence and war," Malala said in her statement. "I am heartbroken that America is turning its back on a proud history of welcoming refugees and immigrants — the people who helped build your country, ready to work hard in exchange for a fair chance at a new life."

Malala responds to Trump's executive action on refugees: "I am heartbroken" https://t.co/E9fDH2vr9E pic.twitter.com/VFaOi7rdUO

​"I am heartbroken that Syrian refugee children, who have suffered through six years of war by no fault of their own, are singled-out for discrimination," she wrote.

Zuckerberg, the CEO of the social media giant, was more reserved in his reaction.

"The United States is a nation of immigrants, and we should be proud of that," he wrote in his Facebook post.

"We should also keep our doors open to refugees and those who need help. That's who we are. Had we turned away refugees a few decades ago, Priscilla's family wouldn't be here today," he wrote, referring to Priscilla Chan, his wife.

However, Zuckerberg noted some positive reactions to Trump's policies.

"I'm glad the President believes our country should continue to benefit from ‘people of great talent coming into the country,'" he wrote. "I was glad to hear President Trump say he's going to "work something out" for immigrants who were brought to this country at a young age by their parents."

According to Zuckerberg, currently about 750,000 young migrants benefit from the Deferred Action for Childhood Arrivals (DACA), a program that allows them to live and work legally in the US.

The bans, enacted by executive order by Trump January 27, indefinitely suspends the US program to accept Syrian refugees and temporarily bans entry to the US of nationals from predominantly Muslim Iran, Iraq, Libya, Somalia, Sudan, Syria and Yemen, even if they hold valid visas or green cards, in some cases. Christians and other members of minority religions from those countries are to take priority in immigration processes, the new regulations state.