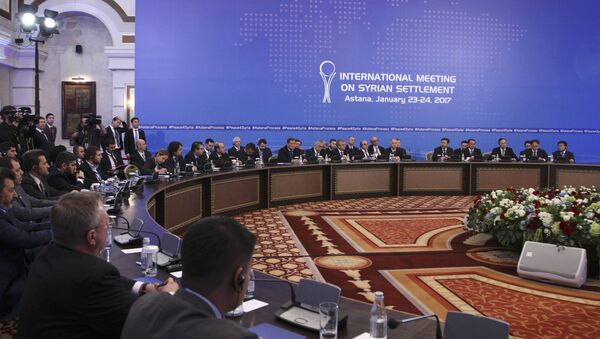 "Astana talks have provided a remarkable contribution for the exerted efforts to push for peace in Syria," Sharif said.

De Mistura's spokeswoman reminded that the Astana negotiations had resulted in three main results, namely a dialogue between Damascus and the opposition, in creation of a mechanism to monitor the ceasefire and a joint statement made by Russia, Turkey and Iran that strengthens the ceasefire in the crisis-torn Syria.

Asia
UN Urges Arab States to Engage in Syria Crisis Talks - Special Envoy
Yara Sharif also stated that the United Nations is ready to contribute to the development and work of the trilateral Russia-Iran-Turkey mechanism to monitor the ceasefire in Syria agreed at the Astana talks on the Syrian crisis settlement.

"The UN stands ready to assist the parties to the trilateral mechanism in further development if needed and ensuring and strengthening of the ceasefire's quality," Sharif said.

De Mistura's spokeswoman stressed that the comprehensive ceasefire in Syria is pivotal for reaching a political solution "which is the only path of achieving peace" in the country.