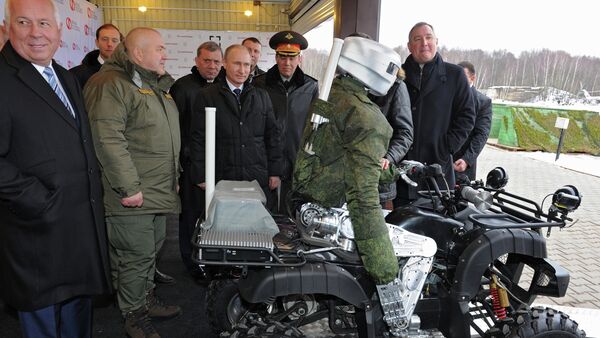 Russia needs to develop its own advanced technologies in the sphere of robotics to strengthen combat readiness of the country's general purpose forces, Russian President Vladimir Putin said Thursday.

Russian Troops to Fight Chemical, Nuclear Attacks With Drone-Installed Robotics
MOSCOW (Sputnik) — He added that the general purpose forces should be strengthened "taking into consideration the clear understanding of the potential conflicts' nature and mainstream trends in the development of armed forces both globally and domestically."

"The development of autonomous robotic systems is an important line of research. These systems could radically change the spectrum of weaponry for the general purpose forces. We need our own effective technologies in these sphere," Putin said at a meeting of Russia's Military-Industrial Commission.

According to the Russian leader, it is also necessary to lay the scientific groundwork for the country's new rearmament program after 2020.

Russia is in the process of implementing a large-scale rearmament program, which was announced in 2010 and is expected to end in 2020. The cost of the modernization is estimated at about 20 trillion rubles ($337 billion).

Within the framework of the program, Russia's Armed Forces are receiving new warships, such as Varshavyanka class diesel-electric submarines, air defense systems, including S-400 Triumf systems, and combat vehicles built on the Armata platform among other pieces of military hardware.