Syria's Lost Generation: No Future for Country Where Children Get No Education 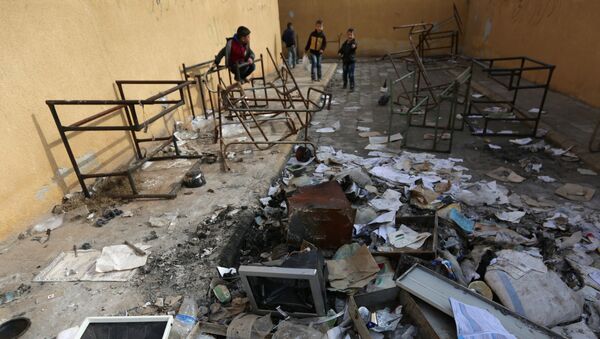 © REUTERS / Khalil Ashawi
Subscribe
The United Nations Children's Fund (UNICEF) has warned of a risk of a lost generation of Syrian children: a total of 2.7 million Syrian children are missing out on an education due to the conflict. Radio Sputnik spoke with UNICEF's Najwa Mekki, who confirmed that the country's would-be students have found themselves in dire conditions.

Over 40% of Syrian Child Refugees Missing Out on School - UNICEF
On Thursday, the UN organization published a report saying that a total of 2.7 million Syrian children are missing out on an education. The bulk of them are inside war-torn Syria itself where millions of minors remain in danger as the conflict nears its sixth-year mark.

Nearly half a million Syrian children are currently enrolled in schools across Turkey. However, one of the top refugee hosting countries in the world, is currently short of resources to give education to all refugee youngsters.

Radio Sputnik discussed the issue with Najwa Mekki, UNICEF's Communication Specialist, who explained how that number has been evaluated.

"We are really concerned about the situation of these children. There is definitely a lot of effort by UNICEF, by other international organizations, by government partners, by civil society organizations and non-governmental organizations. There is a lot of work being done to make sure that those children continue their education but yet that is not enough," she acknowledged.

It is not enough because of the conflict, because of the lack of resources, she elaborated/ What they are really concerned about, she said, is that if that number of children don't go to school they are turning into a lost generation:

For the Syrian refugees who fled to Europe the conditions remain as bad, Najwa Mekki noted. 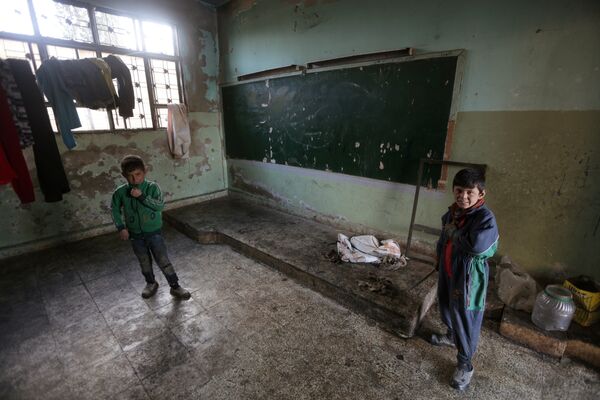 "Look at the weather conditions at the moment. They are very dire. Our message from the beginning has been to take the best interest of a child when you consider these cases," she said.

"So we do urge all countries who are hosting refugees now and the west as well to keep the best interest of a child in mind, to look at way that we can provide for those children who have been forced out. These are not the people who have chosen voluntarily to leave their country, these are people who have been forced to leave because of the conflict. Their choice would have been to stay home but the conditions have pushed them out," she explained.

"And it is important that we give them the support necessary so that they live in dignity, so that they recover their rights, so that they have a minimum of basic elements, that is all they ask for – education, health, access to services, something that allows them to survive and to survive with dignity," she said. 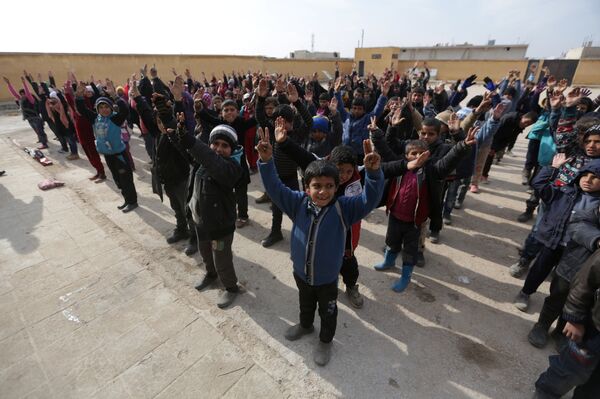 Students gesture as they stand in line at the 'Aisha Mother of the BelieversÕ school which was recently reopened after rebels took control of al-Rai town from Islamic State militants, Syria January 16, 2017
© REUTERS / Khalil Ashawi

UNICEF's Communication Specialist however noted that for the first time since the start of the Syrian crisis, there are more Syrian children, who fled to Turkey, attending class than there are out of school.

She said she has recently visited  Gaziantep, a city in the western part of Turkey's Southeastern Anatolia Region, some 185 kilometers east of Adana and 97 kilometres north of Aleppo, Syria. And she was very impressed with the work she has seen happening in Turkey to make sure that Syrian children go back to school and that they are better observed within the community.

"There has definitely been a lot of progress: just between June last year and the present there has been an increase of 50 per cent in the number of Syrian refugee children going to school.  And this has been a great achievement," she told Sputnik.

But at the same time, she said, there is a significant number of children, 40 per cent of the Syrian refugee children, who are old enough to go to school and yet they are still missing out on their education.  And this is where the international community and various welfare organizations need to focus their efforts next, she stated.

000000
Popular comments
thank s to Obomber - the criminal ex-pres of US - there are millions of destroyed lives (children & adults) in Libya, Syria, Iraq, Afghanistan and E Ukraine
asimpleguest
21 January 2017, 13:35 GMT1
000000
Do start with. Define education? There are no real educational systems on our planet (ok there is one now in the new founded University in Russia, but it is a good start)! The systems are all made up by the Jesuits. %99 being told in schools and universities are lies. It is time to change that. Syria and Iraq always been the ME states with the best educational system and have the chance now to educate their children appropriate and we will, to make good and honest human beings out of our children. That is the most important thing to change our world to a better place. You cant teach anything, the only thing you can do is helping people to start thinking.