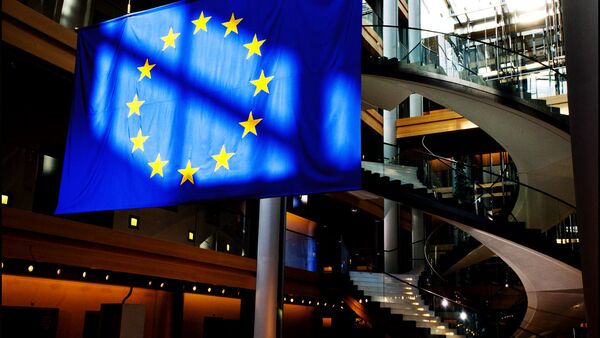 © Flickr / European Parliament
Subscribe
The European Parliament lawmakers on Tuesday will elect in a secret ballot a successor to Martin Schulz, who is stepping down in order to focus on the election campaign in his native Germany ahead of this summer parliamentary vote.

MOSCOW (Sputnik) — To win, any of the seven contenders for the highest post in the 751-seat Parliament needs to get an absolute majority. If none manages to obtain the necessary support following three rounds, the fourth round will see two most popular candidates competing simply for the highest number of votes.

Next EU Parliamentary Election May Be a 'Critical Point' for Bloc, Official Says
Member of the European People’s Party (EPP) Antonio Tajani considered to be a front runner mostly based on the fact he comes from the largest parliamentary group. Tajani, a former journalist for public broadcaster RAI and newspaper Il Giornale, is still closely associated with ex-prime minister of Italy Silvio Berlusconi as once he served as his spokesperson. Besides, Tajani has a serious experience of work in Brussels, having served as a European lawmaker for 14 years and for 6 years as a vice president of the European Commission.

In December, when Tajani was chosen as the EPP candidate, the Group’s leader Wanfred Weber called him a “bridge-builder” between the political forces “inside our house and a strong voice outside”. But many lawmakers still doubt his credentials in bridge-building, since Tajani became the first candidate within the largest European Parliament’s group to stand internal primaries rather than being nominated unanimously by the whole group.

In order to secure the election, Tajani needs the support of 376 lawmakers, while the EPP has just 214 seats.

French Ex-PM Valls Calls Trump’s Remarks on EU, NATO 'Declaration of War'
Tajani’s main rival is another Italian national, coming from the second-largest group with 189 seats — Gianni Pitella from Socialist and Democrats (S&D). According to the 2014 power-sharing accord between the EPP and S&D, two groups have ruled in the so-called grand coalition to make the parliaments' work smoother. This deal also prescribed that in 2017 the post currently occupied by S&D member Schulz would go to an EPP candidate.

However, Pitella challenged this unofficial agreement by standing for the top job himself, arguing his candidacy would prevent the concentration of power in the hands of the EPP as both European Commission head Jean-Claude Juncker and Donald Tusk, leading the European Council of 28 national leaders, come from the EPP.

The race for the top job in the European Parliament also includes two women — Belgian lawmaker Helga Stevens from the third-largest European Conservatives and Reformists (ECR) group, known for being the first female within the Parliament identifying herself as deaf, and Eleonora Forenza from Confederal Group of the European United Left — Nordic Green Left, calling herself “a feminist from the south of Europe” and promising to radically change an EU model "based on neoliberalism, on austerity, on budget constraint, on the sovereign debts and the blackmails”, as she put it last Thursday outlining her candidacy.

Hollande on Trump's NATO Remarks: Europe Needs No Policy Advice From Abroad
Another candidate is Romanian lawmaker Laurentiu Rebega, who originally belonged to S&D but in 2015 defected to Marine Le Pen’s Europe of Nations and Freedom group and now stands as the smallest parliamentary group's choice for presidency. He thinks that “a better Europe can only be built with stronger nations”, as Rebega told last week in a statement declaring his bid.

Last but not least is former Belgium Prime Minister and leader of the forth-largest  liberal ALDE Group comprising 68 lawmakers Guy Verhofstadt who positions himself as a compromise candidate.

"The most likely winner is Mr. Tajani because he is a candidate from the biggest political group. But we will have a few days to discuss and form alliances and I compare this to sea with high waves and lot of boats and nobody knows which boat will be the first in the harbor," Vice President of the European Parliament Alexander Graf Lambsdorff told Sputnik late last week, suggesting that it may also be “Mr. Verhofstadt's boat if the alliances shift".

The vote on Tuesday will be followed by the election of the parliament’s 14 vice presidents as well as five quaestors, responsible for administrative and financial matters directly affecting the lawmakers.