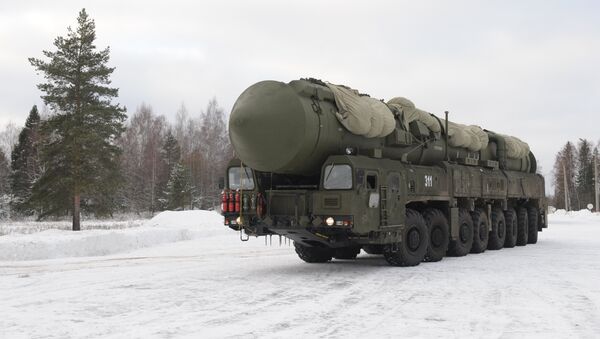 © Sputnik / Sergey Pyatakov
/
Go to the mediabank
Subscribe
International
India
Africa
US President-elect Donald Trump has indicated that Washington could lift sanctions imposed on Russia in exchange for a major nuclear arms reduction treaty. Defense analyst Igor Korotchenko told RIA Novosti that the deal could only be reached if the United States and its allies meet three conditions.

"If the incoming US administration is truly willing to discuss nuclear arms cuts, then Russia is ready to take part in these talks on three conditions. The first one involves transporting all US tactical nuclear armaments from Europe back to the US," Korotchenko, chief editor of the Russian magazine National Defense, said.

Trump Speaks: US President-Elect's Statements Before and After Election
The US-built tactical nuclear bombs have recently made headlines when the US National Nuclear Security Administration (NNSA) announced that the B61-12 warhead life extension program (LEP) had entered the production engineering phase. This is the final stage before production, which is scheduled to begin in 2020. The bombs are stationed in Belgium, the Netherlands, Germany, Italy and Turkey.

Under the second condition, the treaty will cover nuclear arsenals of the United States, the United Kingdom and France on the one hand and Russia's nuclear potential on the other, the expert explained.

The third condition will see the United States sign a legally binding document limiting Washington's global missile defense initiative, Korotchenko said. This agreement will cover land bases, as well as the sea-based component of the program.

Kremlin Comments on Trump's Statement on Condition for Lifting Sanctions
In 2016, the US-built NATO-operated Aegis Ashore missile defense site became operational in Deveselu, Romania. The second Aegis Ashore base located in Redzikowo, Poland, is scheduled to be completed in 2018. The system is ostensibly aimed at protecting Washington's allies in Europe from the nuclear threat from Iran. Russia has voiced its deep concerns over the initiative's true goals, saying it is detrimental to regional security and stability.

Korotchenko also said that the US will also have to pledge to refrain from deploying missile defense system to space.

"These [three] issues could be combined into a single 'package' along with a new treaty on the reduction of strategic offensive arms," he said. "If they are part of the talks, then it clearly makes sense to conduct negotiations on nuclear arms cuts with the incoming US administration."

Russia and the United States signed the latest nuclear arms reduction treaty, known as New START, in 2010. The agreement entered into force in 2011 and is expected to expire in a decade.

Trump Shares View on Foreign Policy, Ties With Russia, Urges Nuclear Disarmament
Earlier on Monday, US President-elect Donald Trump spoke in favor of cutting nuclear armaments "very substantially," adding that "nuclear weapons should be way down." He also suggested that he will try to negotiate "some good deals with Russia," offering sanctions relief in exchange.
Korotchenko brushed this idea off, saying that these issues should be addressed separately.

"The issue of nuclear arms reduction, involving Russia and the United States, must be resolved without reference to partially lifting sanctions which Washington imposed on Russia," he said.