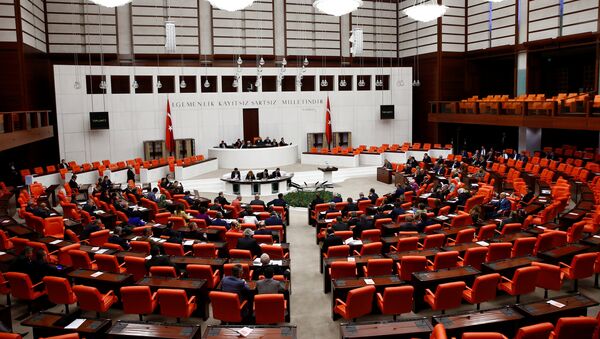 Former Turkish diplomats urged the incumbent lawmakers to vote against the constitutional amendments aimed at establishing a presidential system in the country.

Draft of Turkey's New Constitution to Be Submitted to Parliament Friday
MOSCOW (Sputnik) — A total of 62 former Turkish diplomats urged the lawmakers to vote against the amendments to the constitution aimed at establishing a presidential system in the country.

"We are deeply concerned that such a development will further divide Turkey and will put it into a serious internal and external crisis at a time when the Republic of Turkey is facing terrorism, economic difficulties and the threat of war. The Republic of Turkey will lose its qualifications as a democratic, secular and rule of law-based state if this proposal is legislated," the diplomats said in a statement as quoted by the Hurriyet newspaper.

On January 13, the parliament approved Article 8, under which the president will have the powers to appoint and dismiss ministers, with 340 votes in favor and 135 against. The final round of voting will take place later this week.

The controversial bill is described as a power-grab by Turkey's opposition Republican People's Party and pro-Kurdish Peoples' Democratic Party.