Here's Why President Putin Should Visit South Asia This Year 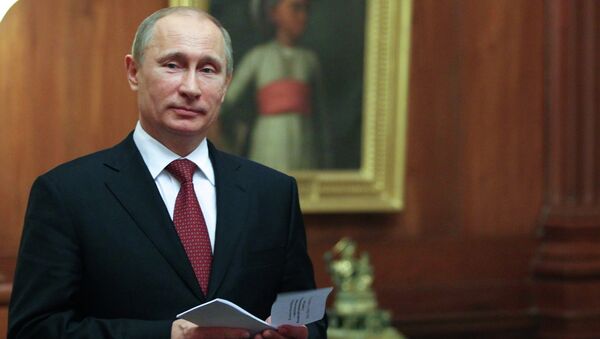 Andrew Korybko
All materials
The Russian President is long overdue for a visit to one of the centerpiece regions of the emerging Indo-Pacific century, and the overlap of infrastructure, trade, and institutional interests there should give President Putin more than enough reasons to seriously consider taking a trip to South Asia.

Global politics have been steadily shifting eastward over the years as international affairs increasingly take on an Asian tone, though the prevailing sentiment has been that the Pacific region will dominate in the coming future. While there’s plenty of evidence to suggest that East and Southeast Asia will increase their global importance all across this century, comparatively less has been said about the future potential of South Asia and the broader Indian Ocean region.

In fact, it can be confidently argued that the 21st century won’t just be about the Asia-Pacific, but rather the Indo-Pacific, because these two areas of the world are interconnected and becoming geopolitically inseparable.

The maritime portion of China’s One Belt One Road vision of global connectivity heavily depends on the Indian Ocean for facilitating trade between the People’s Republic and its Mideast, European, and African partners, with the game-changing flagship project of CPEC functioning as a convenient mainland shortcut for expediting commerce to China by means of the state-of-the-art overland routes being built all across Pakistan. Similarly, India is forecast to maintain steady and impressive growth throughout the coming years, thereby giving it enormous market potential and economic influence.

Opposition to China-Pakistan Economic Corridor 'Not Directed Against Beijing'
Every Great Power would do well to devise their own South Asian strategy for reaping the benefits of this coming economic bonanza, and Russia is certainly not an exception among its peers.

2017 is the perfect year for Russia to remind the world about its historic South Asian interests and show that it’s serious about diversifying its “Pivot to Asia” away from its present focus on the Pacific and in the direction of the Indian Ocean. Unlike times past, however, Russia is now on very good terms with both India and its rival Pakistan, as Moscow and Islamabad are engaged in a fast-moving and unprecedented rapprochement nowadays, so President Putin can’t visit one state without stopping by the other as well.

Moreover, due to strategic sensitivities, such a visit couldn’t be about anything partisan since that would undermine the viability of Russia’s balancing act in Asia and interfere with its military diplomacy. Although some jealous jingoists in India might object in principle to President Putin potentially visiting Pakistan, they’d do well to remember that Moscow is merely practicing the same policy of “multi-alignment” as New Delhi is, and as Russian envoy to Afghanistan Zamir Kabulov rhetorically remarked in December, “India has close cooperation with the US, does Moscow complain? Then why complain about much lower level of cooperation with Pakistan?”

Fortuitously, this year presents three apolitical and uncontroversial reasons for President Putin to visit each of these South Asian leaders in stunningly showcasing the versatility of Russia’s “Pivot to Asia” and its commitment to Eurasian development.

Let’s take a look at the three mutually beneficial themes which Russia could actively promote if President Putin embarks on a landmark visit to India and Pakistan later this year:

Russia is a crucial investor in South Asia’s strategic energy infrastructure, having been awarded both the rights to construct the $2 billion North-South gas pipeline in Pakistan and billions of dollars’ worth of nuclear power plants in India. President Putin could ideally visit both states sometime this later year in order to inaugurate these key infrastructure projects. The powerful symbolism behind this prospective visit would be that Russia is committed to bettering the quality of life for the over one billion people who reside in one of the most densely populated, impoverished, and rapidly growing regions of the world, thereby enhancing Russia’s position in the humanitarian, social, and soft power spheres.

Russia to Consider Diamond Production Cooperation With India's Gujarat
This clearly serves as an economic impetus for Russia to more closely embrace these two countries if it truly desires to diversify its trading partners away from the West, and the first steps in this direction have already been taken by exploring a free trade agreement between the Eurasian Union (EAU) and India to complement the planned North-South Corridor that’s being pioneered between the two via Iran and Azerbaijan.

Considerably less progress, however, has been made in advancing Russia’s trade interests in Pakistan. Despite Russian Ambassador to Pakistan Alexey Dedov announcing in early December that he “cannot exclude” the possibility of the EAU and CPEC one day merging, the Russian Embassy in Islamabad clarified that Moscow isn’t officially participating in this series of projects and cited a similar refutation from the New Delhi Embassy in late November.

Nevertheless, just because the Russian government isn’t investing in CPEC doesn’t mean that private Russian companies can’t partake in the fruits of this initiative once it’s finally completed, as it’s only natural that such actors will inevitably utilize this apolitical transport infrastructure to further their business interests in the region.

Therefore, it would be wise for Russia to consider expanding its planned free trade agreement discussions with India to include the entirety of the South Asian Association of Regional Cooperation (SAARC) in order to seal a bloc-to-bloc deal with the EAU. Although SAARC is presently fractured as a result of Indian-initiated moves late last year, Russia could breathe some restorative life back into the organization and encourage its revival by publicly entertaining the possibility of an EAU-SAARC free trade agreement, which might succeed in bringing India and Pakistan back to the negotiating table and breaking the ice between both countries. For maximum effect, President Putin could unveil his country’s plans right before or during his visit to South Asia.

Russia Expects India, Pakistan to Obtain SCO Membership by 2017 Summit
Finally, the last main reason why President Putin should visit South Asia this year is because it marks the ascension of India and Pakistan to the Shanghai Cooperation Organization (SCO). This multipolar grouping has never before expanded in such a dramatic way, and these two countries’ incorporation into the bloc will importantly bring a total of four nuclear powers under a single umbrella.

Moreover, the inclusion of India and Pakistan fundamentally alters the dynamics of the SCO by transforming it from being a regional Russian-Chinese cooperation platform in Central Asia to a pan-Eurasian community of Great Powers. If one recalls how Russia’s Tripartite partners of Iran and Turkey are also associated with the SCO through their observer membership and dialogue partner status, respectively, then this organization truly becomes one of the most influential entities in the world.

Seeing as how the SCO is excitedly coming of age as a globally impactful organization in 2017, it’s only fitting that President Putin visits its two newest official members and personally welcomes them into the multipolar organization.

This can also go a long way in advancing Prime Minister Medvedev’s vision of an eventual EAU-SCO-ASEAN economic partnership because South Asia is geographically endowed with being the crucial pivot space for furthering Russia’s ambitions in ASEAN.

After all, the path to Southeast Asia obviously runs through South and East Asia first, and with Russia’s “Pivot to Asia” already embracing China (East Asia), it’s only logical that it’ll also broaden to include India and Pakistan (South Asia) prior to incorporating ASEAN (Southeast Asia) into a united Eurasia from Minsk to Manila. In this manner, South Asia thus becomes the necessary stepping stone to actualizing Russia’s grand strategic designs for the supercontinent.