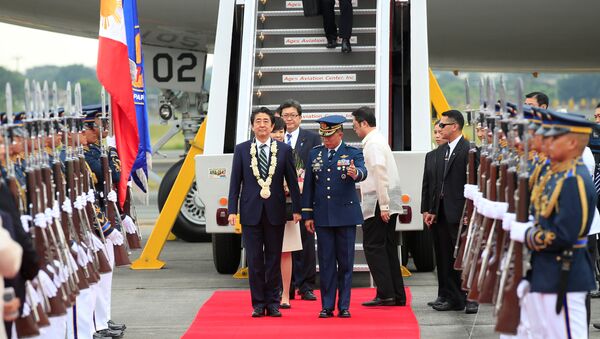 Japanese Prime Minister Shinzo Abe has signed a 1-trillion yen (about $8.7 billion) aid package over the next five years to the Philippines, meant to improve economic and political relations between the two island nations. The package is focused on infrastructure and energy.

Abe's two-day visit to the archipelago makes him the first foreign leader to visit since the election of the Philippines' controversial President Rodrigo Duterte in May 2016. "I chose the Philippines as my first destination this year and that is a testament to my primary emphasis on our bilateral relationship," Abe said during a press conference.

"We will leverage Japanese technology and know-how to the fullest extent to positively cooperate for the improvement of infrastructure in Metro Manila and the whole of the Philippines," he added.

In exchange for Japan's money, said Foreign Press Secretary Yasuhisa Kawamura, the Land of the Rising Sun expects a "business-friendly environment on the side of the Philippines." Japan is not simply pouring money into the Philippines out of the goodness of its heart, but to establish a "two-way street" to encourage "Philippine officials and the private sector [to] cooperate with us."

Kawamura also mentioned that Japan will "attend" the upcoming joint military exercises between American and Filipino troops. But when asked about the improving relationship between Manila and Beijing under Duterte, Kawamura declined to comment.

Abe, however, was willing to speak on the subject. "I welcome the fact th

Duterte: US Should Turn to UN If Disapproves of Manila's Anti-Drug Policy
at President Duterte is making efforts to improve China-Philippine relations," he said, in seeking a peaceful resolution of quarrels such as the clashes over territories in the disputed South China Sea.

Abe is to follow his trip to Manila with visits to Australia, Indonesia, and Vietnam, in a series of diplomatic missions to Japan's Pacific neighbors. Many see this as his administration responding to a more aggressive Chinese foreign policy.

Duterte issued a statement claiming that his nation and Japan would increase "maritime and security cooperation." He also said Japan would aid his nation in their "campaign to destroy illegal drugs trade apparatus" by helping to fund rehabilitation facilities for drug addicts.

For most of its modern history, The Philippines has been entrenched within the American sphere of influence. That has rapidly changed under Duterte, who has loudly proclaimed his distaste for the US under President Obama, and thusly has brought his nation closer to China politically and economically. In an October 2016 visit to China, he announced a "separation from the United States." He has also strengthened ties with Russia, but until now he has been relatively quiet in regards to Japan.

Japan is The Philippines' largest trading partner, with the former receiving 21 percent of all the latter's exports in 2016, according to IMF reports. In recent years, Japan has also worked to improve military relations between the two nations, donating $11 million worth of vessels to the Philippine Coast Guard in 2013, and signing a defense supply pact in 2016.