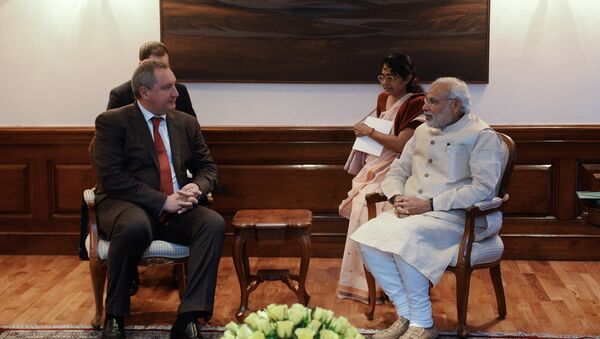 India-Russia Ties 'Stood the Test of Time and Will Stand the Test of Future'
GANDHINAGAR (India) (Sputnik) — Modi visited the exhibition pavilion of Russia at the 8th Global Summit Vibrant Gujarat in Gandhinagar, India, where Rogozin told him about the principles of operation of the Russian hardware-software complex. The Indian prime minister asked several clarifying questions.

"The Safe City system allows uniting the data that comes from different cameras, sensors and other data sources into one algorithm system, and then processing the data immediately, providing recommendations to all security authorities," Rogozin told journalists after the presentation.

India could be interested in the system in light of its Smart City government program, the Russian deputy prime minister added.

​Rogozin and Modi also had a bilateral meeting prior to the summit earlier in the day.

The Emergencies Ministry of Russia supervises the Safe City complex, which is a modern automated system designed to help maintain the safety of citizens through collecting reports about incidents and carrying out surveillance over certain locations with video cameras, with a possibility to dispatch police teams if needed.

India and Israel to Intensify Science and Technology Cooperation
Moreover, the first meeting of the Russian-Indian committee on science and technology will take place in June in the Russian city of Novosibirsk, Russian Deputy Prime Minister Dmitry Rogozin said on Monday.

"The meeting will be held in our main academic center in Siberia — Akademgorodok, within the Technoprom forum in June 2017," Rogozin said on the sidelines of the Vibrant Gujarat international forum in the Indian city of Gandhinagar.

Rogozin noted that 2017 marked the 70th anniversary of the diplomatic relations between Russia and India, and due to that a number of traditional and new events between the two countries is expected to take place, including the visit of Indian Prime Minister Narendra Modi, a military-industrial conference and others.

India and Russia agreed to establish a bilateral science and technology committee during a BRICS summit in India’s Goa on October 15-16, 2016.