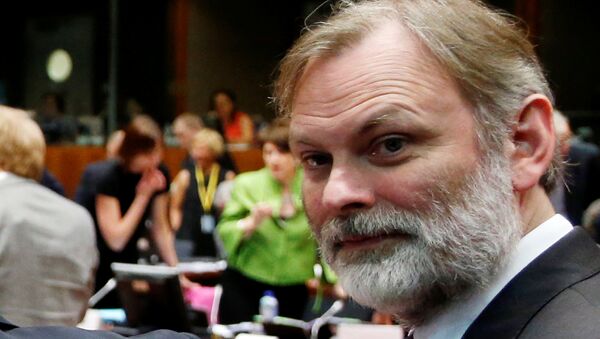 Sir Tim Barrow's elevation to the top diplomatic role in Brussels has come at lightning speed as UK Prime Minister Theresa May swooped to fill the role after the resignation of his predecessor.

Fantastic to have Tim Barrow as new UK Representative to EU. A brilliant and highly respected diplomat who will get the best deal for the UK

@paulnuttallukip He doesn't have to prove anything to you, nutter.

Rogers quit his post as Britain's top diplomat in the EU saying, in a leaving letter to staff: "We do not yet know what the government will set as negotiating objectives for the UK's relationship with the EU after exit. Serious multilateral negotiating experience is in short supply in Whitehall, and that is not the case in the Commission or in the Council.

"I hope you will continue to challenge ill-founded arguments and muddled thinking and that you will never be afraid to speak the truth to those in power," Rogers wrote.

He hit the headlines in December 2016, when it was leaked to the media that he warned the UK Government that renegotiation of Britain's relationship with the EU could take ten years. Political commentators pointed out that — as an appointee of former UK PM David Cameron — Rogers was not a believer in Brexit and did not have the confidence of those negotiating Britain's exit from the EU.

I welcome the resignation of UK ambassador to Brussels, Ivan Rogers. The Foreign Office needs a complete clear out.

Best Wishes to Sir Ivan Rogers, a much respected UK civil servant in Brussels — who knew what he was talking about.#Brexit

Sir Ivan Rogers resignation is a good thing for Britain. He had become far to close to the EU Institutions to do his job properly.

"So, Sir Ivan Rogers has quit the civil service entirely, following his departure from his role as our ambassador to the EU. Good," said the Leave.eu blog, January 9.

"The taxpayer funded, £170,000-a-year (US$207,000) Eurocrat, earned his stripes as Tony Blair's Principle Private Secretary while he [was] Prime Minister. He would later return to government as David Cameron's Adviser for Europe, becoming our Ambassador in 2013.

"Ivan 'the terrible' as revealed in Tim Shipman's Brexit book, All Out War, was one of the men most responsible for Cameron asking for too little. Sources close to the former PM are quoted as saying: 'They were status quo. They were happy to take No for an answer, happy to believe things weren't possible when they could be possible. I've lost count of the number of times Ivan threatened to resign,' " Leave.eu said.

Sir Tim Barrow — a former UK ambassador to Russia and Ukraine — is seen as a safe pair of hands, capable of leading the diplomatic talks aimed at securing a stable Brexit and a best deal for Britain in its new relationship with the remaining EU member states.