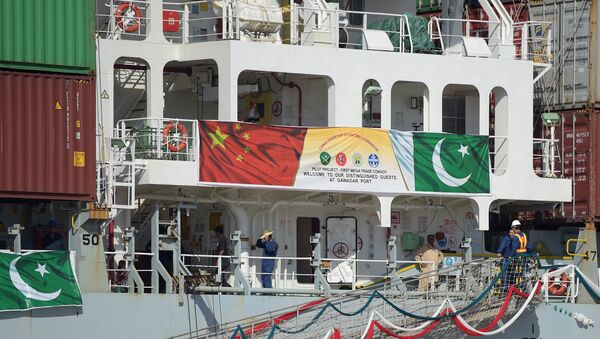 © AFP 2022 / AMIR QURESHI
Subscribe
China continues to invest in building close economic and trade cooperation with its Asian neighbors. In addition, Beijing is seeking to take control over infrastructure centers of the Asian economy, in a bid to become the regional economic leader.

Russia Denies 'Secret Talks' on China-Pakistan Economic Corridor
According to Sharif, the facility is a "concrete and outstanding example of constructive cooperation between China and Pakistan.

New Silk Road: Beijing Offers Viable Alternative to Western-Type Economic Model
The Pakistani exchange was one of the best performers in the Asian stock market in 2016. The KSE 100 index, which shows performance of 100 major companies of Pakistan, rose over 40 percent this year. The deal between the Chinese exchanges and the Pakistani stock exchange is a breakthrough for Chinese companies in the Asian stock market.

China, India Show Interest in North-South Transport Corridor– Azerbaijani FM
China’s involvement in an NPP in Pakistan, the China-Pakistan economic corridor and the deal with the Pakistani exchange are examples of Beijing taking control over key centers of the Asian economy, according to Mikhail Belyaev, an expert at the Stock Market and Management Institute.