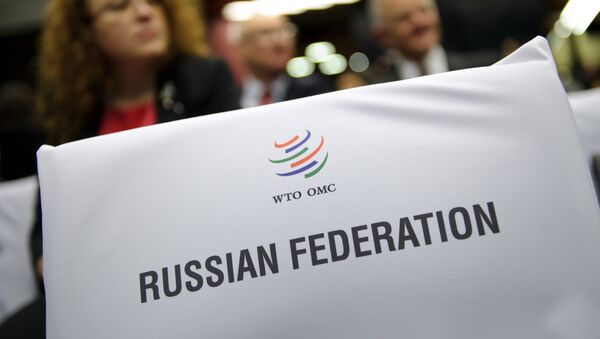 © AFP 2021 / FABRICE COFFRINI
Subscribe
In 2016, in some areas, Russia acted as a responsible member of the WTO community, but Russia’s actions continued to depart from core tenets of the WTO, according to the report of the US Trade Representative (USTR).

Russian Prime Minister Expresses Concern Over WTO Collapse
MOSCOW (Sputnik) — The United States is paying close attention to Russia’s actions in trade policy that Washington deems not meeting the fundamental principles of the World Trade Organization (WTO) and stands ready to take action, the report of the US Trade Representative (USTR) said on Wednesday.

"In 2016, in some areas, Russia acted as a responsible member of the WTO community… On the whole, however, Russia’s actions continued to depart from core tenets of the WTO — liberal trade, transparency, predictability — in favor of inward-looking, import-substitution economic policies," the report said.

Among the "rare bright spots" the report named reducing the bound tariffs in accordance with Russia’s commitments in its WTO Protocol of Accession, eliminating safeguard measures as scheduled, working to implement the Trade Facilitation Agreement, and participating in its first Trade Policy Review.

At the same time, Russia’s application of non-tariff measures "has often undermined benefits expected from the application of lower tariffs," the report added, explaining that the United States continues to raise concerns about "opaque customs regulations on import valuation, burdensome import licensing requirements" and the rules concerning alcoholic products’ importation.

WTO to Announce Decision on Russia-EU Dispute Over Third Energy Package May 2017
The report added that Russia used "discriminatory" sanitary and phytosanitary (SPS) measures and had "imposed a general ban on imports from the United States of most agricultural products."

The United States is also said to continue to monitor Russia’s implementation of its industrial policies, especially the ones relating to titanium and natural gas, the report stressed. It also notes Russia’s data localization law that, according to the report, is "opaque and vague in many respects."

According to the report, in case Russia or the Eurasian Economic Union (EAEU) "implements a measure that appears to be inconsistent with Russia’s WTO obligations," the USTR would investigate the case and use all appropriate means to resolve the issue. Those means may, if needed, "encompass the full panoply of WTO tools, including, where appropriate, WTO dispute settlement," the report stressed.