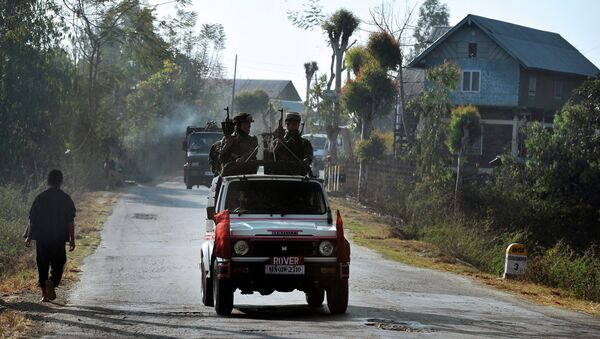 © AFP 2023 / Manjunath KIRAN/FILES
Subscribe
International
India
Africa
India’s central government sent 4,000 paramilitary personnel to the northwestern state of Manipur to reopen a highway connecting the state to its northern neighbor, Nagaland, and stop the violent protests the erection of the blockade had sparked.

Asia
India Doubles Power Supply to Nepal, Promises More
India dispatched 4,000 paramilitary troops to Manipur to address the blockade of Highway 2 imposed by the local Naga minority group. These troops will support 13,500 personnel already located in the state, according to the The Times of India.

The economic blockade of the NH-2, imposed by the Union Naga Council (UNC), has already been in place for two months and has caused locals to rise up in violent protests. Crowds of people protesting the blockade have reportedly vandalized and burned cars and passenger buses; according to various reports, up to 40 vehicles have been burned.

On December 15, four policemen died when they were ambushed as they headed to a ceremony to inaugurate the newly created district of Tengnoupal, which was carved out from the existing Naga-dominated district of Chandel.

A curfew was imposed on the Eastern Imphal district following the events.

Asia
India's Counter-Terrorism Body Arrests Daesh Militant
The Naga blockade was erected after state authorities decided to create seven new districts in the state. The UNC says the new divisions will violate traditional tribal domain boundaries and imposed blockades on highways 37 and 2 (connecting the Manipur state capital city of Imphal to the state's westernmost town  of Jiribam and to the capital of the neighboring state of Nagaland, Dimapur, respectively).

The highways serve as lifelines for landlocked Manipur.  The blockade of highway 37 has already been lifted.

"Our top priority is now to reopen National Highway-2 connecting Manipur [to Nagaland]. While the other highway [NH-37] is reopened, we want to reopen the NH-2 too, as early as possible," a senior Home Ministry official said.

The central government has blamed Manipur authorities for their inability to resolve the blockade dispute and have have made clear that state authorities will not escape responsibility for the crisis.

"It must end as soon as possible as law and order is the responsibility of the state government. Nobody will be allowed to take political advantage out of a humanitarian crisis where common people are suffering," said Minister of State for Home Affairs Kiren Rijiju.

While state authorities claim the new divisions were made as both a response to longstanding demands of local people and for reasons of administrative efficiency, some sources in the Manipur Congress believe Congress Chief Minister Okram Ibobi Singh is merely trying to divide voting districts to win the upcoming elections to keep the position that he has held despite opposition since 2002.