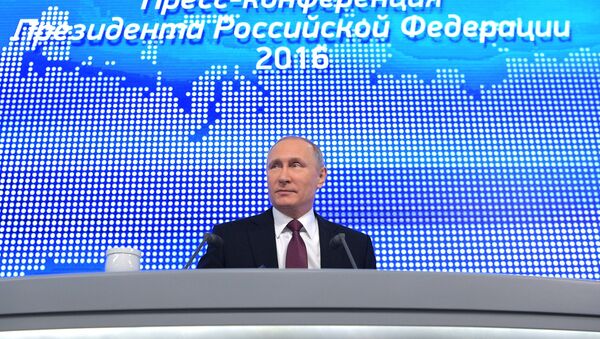 “What I enjoyed most about it was that he [Putin] really trolled the Democrats and his old nemesis Hillary Clinton and basically said that they were whiners and sore losers and sort of made fun of the idea that they were blaming him or Russia for losing the election,” Bausman said.

Putin is such a strong figure the trolls don´t even bother making this a meme #PutinPresser pic.twitter.com/BAbedl3lux

​He further said that it seems that Putin is hopeful that the relations between Russia and the US will improve under President-elect Donald Trump's administration.

“Putin is this incredible media star. He is super popular all over the world and even now Americans are starting to get fascinated with him. My publication takes very pro-Russian sort of positive view of Putin and our traffic has been just surging since the elections,” the editor said.

​He further spoke about the future of the relations between the US and Russia’s presidents and how both are similar in the sense that both aim to make their own countries great again.

“They do seem to have a lot in common. I can foresee that they might get along extremely well and reach a lot of cooperation,” Bausman told Sputnik.

Coming back to Putin’s annual press conference, the editor said that it was “extremely frank” and “open” session and much longer than the US conferences held by Barack Obama.

#PutinPresser One of the great mens of our time. Self confidence ' stay strong pic.twitter.com/0bpK216XlW

​Talking about how nothing was off the table during the session and wide range of topics were covered, the editor compared Putin’s session to “evasive” Obama’s sessions.

“Obama’s recent conference went on for two hours and it was just awful. I actually watched it and he went on for half an hour just attacking and criticizing Russia and Putin and going on about this Russia hacking story. It was sort of embarrassing as an American to see my president behave in such an ignorant fashion,” Bausman said.

​President Vladimir Putin covered a wide range of issues during the major year-end press conference, including the state of the Russian economy, the modernization of the country’s military, its defense spending, sanctions, a new arms race, as well as the country's foreign policy. The press conference lasted for nearly four hours.

000000
Popular comments
Charles is one of the best. RI is a great site.

Angus Gallagher
23 December 2016, 20:45 GMT1
000000
Have always admired Putin as a man still living in the real world and with all the abuse he and Russia have taken from the West they stay cool headed and on point....he says what he does and does what he says and refuses to stoop down to same level as the West with their constant barrage of Lies and B.S.....Putin is a true leader.

Nonyank
23 December 2016, 22:36 GMT
000000
Newsfeed
0
New firstOld first
loader
LIVE
Заголовок открываемого материала
Access to the chat has been blocked for violating the rules . You will be able to participate again through:∞. If you do not agree with the blocking, please use the feedback form
The discussion is closed. You can participate in the discussion within 24 hours after the publication of the article.
To participate in the discussion
log in or register
loader
Chats
Заголовок открываемого материала
Worldwide
InternationalEnglishEnglishMundoEspañolSpanish
Europe
DeutschlandDeutschGermanFranceFrançaisFrenchΕλλάδαΕλληνικάGreekItaliaItalianoItalianČeská republikaČeštinaCzechPolskaPolskiPolishСрбиjаСрпскиSerbianLatvijaLatviešuLatvianLietuvaLietuviųLithuanianMoldovaMoldoveneascăMoldavianБеларусьБеларускiBelarusian
Transcaucasia
ԱրմենիաՀայերենArmenianАҧсныАҧсышәалаAbkhazХуссар ИрыстонИронауОssetianსაქართველოქართულიGeorgianAzərbaycanАzərbaycancaAzerbaijani
Middle East
Sputnik عربيArabicArabicTürkiyeTürkçeTurkishSputnik ایرانPersianPersianSputnik افغانستانDariDari
Central Asia
ҚазақстанҚазақ тіліKazakhКыргызстанКыргызчаKyrgyzOʻzbekistonЎзбекчаUzbekТоҷикистонТоҷикӣTajik
East & Southeast Asia
Việt NamTiếng ViệtVietnamese日本日本語Japanese中国中文Chinese
South America
BrasilPortuguêsPortuguese
NewsfeedBreaking
08:43 GMTOpposition Parties in Maldives Join Hands in Calling For End to Indian Military Presence
08:29 GMTMexican Army Detains 'Priority Target' in 2019 Massacre of Mormon Family, State Attorney Says
08:10 GMTGun Involved in Killing Halyna Hutchins Was Reportedly Used by Crew Off-Set for Fun
07:34 GMTTop UK Army Bosses Accused of 'Covering Up' Killing of Kenyan Woman by British Soldier
06:11 GMTAs Israel Preps to Vaccinate Kids Against COVID-19, Some Say They Will Be Against 'Coercion'
06:06 GMT‘Inexperienced, Green’ Armourer on Alec Baldwin Film Set Described as ‘Careless With Guns’ Before
06:03 GMTHow Long Can Chelsea Survive Without a Striker?
05:22 GMT6.2 Magnitude Earthquake Shakes Taiwan - EMSC
05:14 GMTUS Still Ready For Dialogue With North Korea Without Preconditions, Special Envoy Says
04:31 GMTFacebook Struggled to Curb Violent, Divisive Content in India, Internal Documents Show
03:23 GMTWho’s the Best Football Player in the World?
02:45 GMTAmerican Film Institute Establishes Scholarship in Memory of Halyna Hutchins
02:30 GMTMore Than 10,000 Sequoias Must Be Removed After California Wildfires, National Parks Reveal
01:00 GMTWho has the Edge Between Manchester United and Liverpool?
00:12 GMTBritish Military Brings Over 100 People Who Had Left Afghanistan to UK - Defense Ministry
YesterdayUS Seeking Clarity Over Turkey’s Intention to Declare US Ambassador Persona Non Grata
YesterdayUS Authorities Getting Veterans Involved in Resettlement on Afghan Refugees - Reports
YesterdayBiden’s Popularity Drops More Than That of Any Other US Leader Since End of WWII - Poll
Yesterday‘Rust’ Director ‘Gutted’ by Fatal Shooting of Halyna Hutchins on Set
YesterdayPotty-Mouthed PM: Broadcaster Blocks Boris Johnson's Remarks on Gay Men, Muslim Women