'Poroshenko Bears Full Responsibility for Escalation of Bloodshed in Donbass' 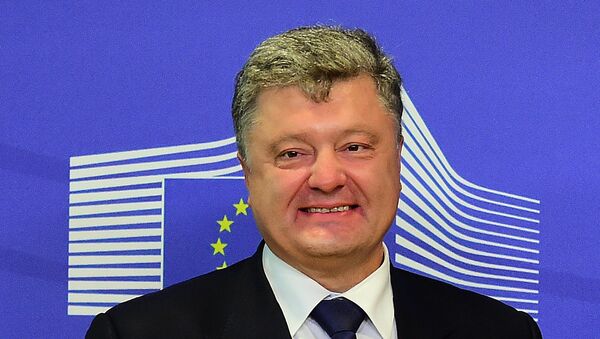 © AFP 2021 / EMMANUEL DUNAND
Subscribe
Leader of the self-proclaimed Luhansk People’s Republic (LPR) in Ukraine’s southeast, Igor Plotnitsky, has blamed Ukrainian President Petro Poroshenko for the escalation of the conflict in the region.

LUHANSK (Sputnik) – The Ukrainian armed forces have carried out some 20 attacks on positions of people’s militia since Sunday, Plotnitsky said.

OSCE SMM Observers Record 75% Spike in Donbass Ceasefire Violations
"Since December 18 the military situation in the direction of Debaltseve [in southeastern Donetsk region] has escalated sharply. Divisions of the Ukrainian Armed Forces, the National Guard of Ukraine and the Nazi battalions, without announcing an end to the ceasefire or presenting any demands, carried out over 20 attacks on the positions of our people’s militia," Plotnitsky said in a statement.

The LPR leader stressed that the Ukrainian forces used artillery and heavy armor in the attacks that should have been withdrawn under the Minsk peace agreement.

Plotnitsky said that there have been casualties and wounded among LPR fighters as a result of the attacks, all of which have been successfully repelled without harming civilians even though "armed units under Kiev control are trying to fire at civilian buildings."

Kiev launched a special military operation in Ukraine’s southeast in April 2014, after local residents refused to recognize the new Ukrainian authorities, which came to power as a result of a coup. In February 2015, the two sides reached a ceasefire deal after talks brokered by the leaders of Russia, France, Germany and Ukraine — the so-called Normandy Format — in the Belarusian capital of Minsk. Kiev has been reluctant to implement a number of Minsk deal provisions.

US State Department Welcomes Ceasefire Agreement in Eastern Ukraine
On Wednesday, German Foreign Minister Frank-Walter Steinmeier called on the conflicting sides in Ukraine to adhere to ceasefire ahead of the winter holidays, particularly in the area of Debaltseve where an escalation of fighting had occurred.

Steinmeier stressed that the withdrawal of heavy weapons must be urgently completed in Ukraine’s southeast and Organization for Security and Co-Operation in Europe (OSCE) monitors should be granted access to all areas of Donbas.

The German foreign minister also called for the release of prisoners, particularly the most vulnerable ones, before the end of 2017.

000000
Popular comments
Poroshenko is just a puppet for the west. It's the west escalating the war in the Donbas region.

Adrienne Adonis
23 December 2016, 04:53 GMT1
000000
PP: "The mouse that roared". I want to go there personally and offer him some 'cheese'. I guarantee you that it will be the last bite of anything he will experience...
marcanhalt
23 December 2016, 02:51 GMT
000000
Newsfeed
0
New firstOld first
loader
LIVE
Заголовок открываемого материала
Access to the chat has been blocked for violating the rules . You will be able to participate again through:∞. If you do not agree with the blocking, please use the feedback form
The discussion is closed. You can participate in the discussion within 24 hours after the publication of the article.
To participate in the discussion
log in or register
loader
Chats
Заголовок открываемого материала
Worldwide
InternationalEnglishEnglishMundoEspañolSpanish
Europe
DeutschlandDeutschGermanFranceFrançaisFrenchΕλλάδαΕλληνικάGreekItaliaItalianoItalianČeská republikaČeštinaCzechPolskaPolskiPolishСрбиjаСрпскиSerbianLatvijaLatviešuLatvianLietuvaLietuviųLithuanianMoldovaMoldoveneascăMoldavianБеларусьБеларускiBelarusian
Transcaucasia
ԱրմենիաՀայերենArmenianАҧсныАҧсышәалаAbkhazХуссар ИрыстонИронауОssetianსაქართველოქართულიGeorgianAzərbaycanАzərbaycancaAzerbaijani
Middle East
Sputnik عربيArabicArabicTürkiyeTürkçeTurkishSputnik ایرانPersianPersianSputnik افغانستانDariDari
Central Asia
ҚазақстанҚазақ тіліKazakhКыргызстанКыргызчаKyrgyzOʻzbekistonЎзбекчаUzbekТоҷикистонТоҷикӣTajik
East & Southeast Asia
Việt NamTiếng ViệtVietnamese日本日本語Japanese俄罗斯卫星通讯社中文（简体）Chinese (simplified)俄罗斯卫星通讯社中文（繁体）Chinese (traditional)
South America
BrasilPortuguêsPortuguese
NewsfeedBreaking
11:40 GMTCongress is a Sinking Ship, Says BJP-Allied Nishad Party Chief in Poll-Bound India's Uttar Pradesh
11:33 GMTFinal Countdown: Who's Leading in Polls Ahead of German Federal Elections?
11:27 GMTMexican Authorities Block Haitian Migrants From Crossing Into US, Seal Off Makeshift Camp
11:26 GMTErdogan Expects Russia to Change Approach to Syria
11:14 GMTIndia's Top Investigative Agency to Probe Influential Monk's Mysterious Death
11:13 GMTSabina Nessa: Police Ask For Help in Identifying Man After Teacher Murdered in London Park
11:11 GMTUK Ministry of Defence Confirms Second Afghan Data Breach, Vows to Prevent New Ones… Again
11:06 GMTKim Jong-un's Sister Responds to Seoul's Proposal to Officially End the Korean War
11:01 GMT'Actors Started Taking Liberties With Me': Actress Mallika Sherawat Recalls Facing Casting Couch
10:58 GMTMerkel Ignored Biden When He Wanted to Make Her His First Call as POTUS, Report Says
10:28 GMTTaliban to Submit Complaints to UN Over US Shooting at Kabul Airport
10:27 GMTEchoes of Tony Blair’s Fuel Crisis in 2000 as UK Petrol Stations Run Out Due to Trucker Shortage
10:18 GMTAUKUS Creation Resulted in Loss of Trust in Biden Administration, Merkel's Ex-Adviser Says
10:13 GMTCumbre Vieja Volcano Erupts on La Palma Island
10:03 GMTGreta Thunberg Joins Fridays for Future Rally in Berlin
10:02 GMTUK Government Downplays Fuel Shortage Threats After Gas Station Closures
10:01 GMTKremlin on Taliban Invitation to Moscow: We Have to Further Monitor Their Activities
09:39 GMTCIA Recalls Top Officer From Austria Following Failure to Respond to Incidents of 'Havana Syndrome'
09:07 GMTMemes Go Viral Amid Barcelona's La Liga Struggles as Catalan Giants Draw Against Cadiz
09:04 GMT'I've Got My Cowboy Hat': 50 Cent Ponders Moving to Texas Over Biden's Tax Hike