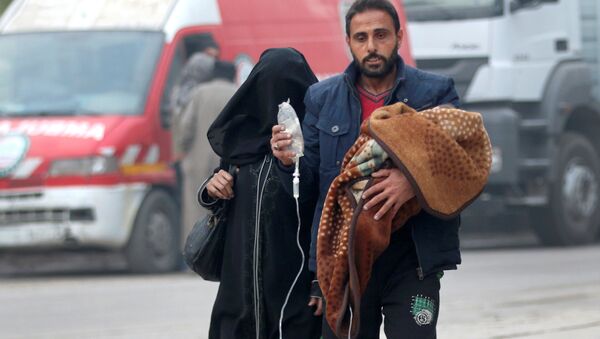 © REUTERS / Abdalrhman Ismail
Subscribe
A spokesperson for the Israel Defense Forces said that Israel has provided over 2,600 Syrians with medical aid since 2013 and will continue to do so for people managing to reach the Israel-Syria border.

US to Press UN Security Council to Improve Delivery of Humanitarian Aid to Syria
MOSCOW (Sputnik) – Israel has provided over 2,600 Syrians with medical aid since 2013 and will continue to do so for people managing to reach the Israel-Syria border, a spokesperson for the Israel Defense Forces said Wednesday.

"Since 2013, over 2,600 Syrians have received medical treatment in Israel. The IDF continues to care for Syrians who reach our border. #Syria," the spokesperson said on Twitter.

On Tuesday, Israeli Prime Minister Benjamin Netanyahu said that Israel was considering the possibility of providing medical assistance to the civilians of Syria's Aleppo in local hospitals.

Israel, which presents itself neutral with respect to the Syrian conflict, has reportedly provided humanitarian and medical aid to Syrians living close to the Israel-Syria border.

Syria has been in a state of civil war since 2011, with government forces fighting Syrian opposition groups striving to overthrow the President Bashar Assad. Damascus is also fighting numerous extremist and terrorist groups such as the Jabhat Fatah al Sham and the Daesh, both outlawed in Russia.