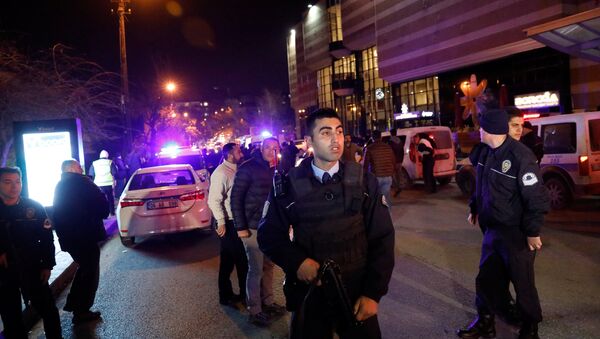 Russian ambassador to Turkey Andrey Karlov has been badly wounded in an armed assault in Ankara, Russian Ministry of Foreign Affairs said on Monday.

The attack took place at the opening of the "Russia through Turks' eyes" photo exhibition, Turkish NTV news channel reports.

Eyewitnesses say that the Ambassador was shot at.

Another photo of the gunman that shot the Russian ambassador in Turkey. Witnesses say they heard him shout "Aleppo" https://t.co/SLxpIq0zEk pic.twitter.com/or2Cfa1gLO

"The ambassador was delivering a speech at the opening of the exhibition, and suddenly, during his speech, there was a shriek 'Allahu Akbar!' — and someone started shooting," an eyewitness told RIA Novosti. "It is likely that the attack was aimed at the Ambassador because after the shots were made the assailant let those present escape the room."

Russian Ministry of Foreign Affairs has confirmed the information that Russian Ambassador suffered a gunshot wound.

"Today, during a public event in Ankara, an unknown person opened chaotic fire, and the ambassador of the Russian Federation in Turkey received a gunshot wound," Zakharova said.

The official statement noted that Russia is in contact with Turkish authorities regarding the attack.

Karlov was not taken to the hospital immediately after the assault, he got aid at the scene of the shooting. The ambassador is reported to be in a critical state.

Later, Russian Foreign Ministry issued a statement saying that Karlov was taken to a hospital.

"According to our information, the Russian Ambassador has been taken to a medical facility in Turkey from the site where he was wounded," Russian Ministry of Foreign Affairs spokeswoman Maria Zakharova said in a statement. "We are checking [the information], we are in contact with Turkish authorities, with law-enforcement authorities. As soon as we have a confirmation, we will inform you."

Soon after the attack, Turkish Interior Minister Suleyman Soylu arrived at the site.

The assailant is reported to have been eliminated, according to Turkish NTV.

The attack comes just a day before Turkish Foreign Minister Mevlut Cavusoglu's planned visit to Moscow for Syria talks with his Russian and Iranian counterparts.