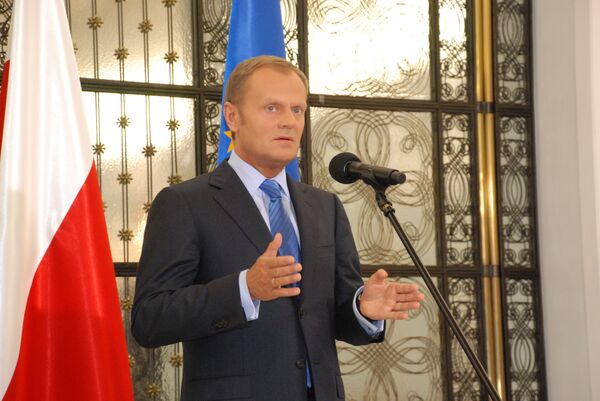 © RIA Novosti . Leonid Sviridov
Subscribe
The EU decision to extend restrictive measures against Russia for an additional six months was not an issue of intense debate at the Thursday EU leaders’ summit, according to President of the European Council Donald Tusk.

Why The EU Sanctions Against Russia Won’t Last
BRUSSELS (Sputnik) – The EU decision to extend restrictive measures against Russia for an additional six months was not an issue of intense debate at the Thursday EU leaders’ summit, President of the European Council Donald Tusk told journalists.

"It was clear that we would prolong the sanctions for six months and some of our colleagues would prefer maybe 12 months, but in fact it wasn’t a discussion," Tusk said at a press conference after the summit.

He added that the possibility of a change in US policy with regard to anti-Russia sanctions under Donald Trump is still not clear.

"It’s still too early to assess responsibly what is the possible policy of the new American administration to Russia, we have too many signals … we have to wait for a formal declaration of the new president [Trump]," Tusk told journalists.

Meanwhile, German Chancellor Angela Merkel explained that the slow implementation of the Minsk agreements on Ukraine is the main reason for EU refusing to ease the anti-Russia sanctions.

On Thursday, an EU source told journalists in Brussels that EU leaders had briefly discussed the possibility of extending economic sanctions against Russia for a year, but agreed to prolong them for a period of six months.

Russia has been targeted by several rounds of sanctions inflicted by Brussels, Washington and their allies in light of Crimea’s reunification with Russia in 2014 and due to Moscow's alleged involvement in the internal Ukrainian conflict, a claim that Russia has repeatedly denied.