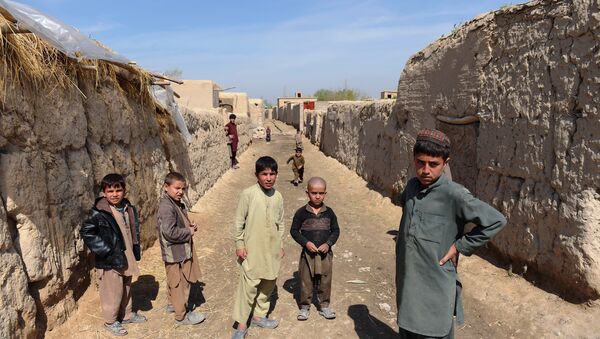 © AFP 2021 / Shah Marai
Subscribe
Child marriage and child labor are a major risk for Afghans repatriated from Pakistan, a new survey released by a children’s rights non-governmental organization has revealed.

MOSCOW (Sputnik) – Almost half of the returnee children are not enrolled in school, the new data, published by the Save the Children Fund on Wednesday, showed. Over 70 percent of the returnee parents who took part in the Fund’s survey said that early marriage and child labor were major risks for children not receiving education.

"Part of the problem is that many repatriated families left stable jobs and lives in Pakistan and are now watching the few savings they have dwindle away knowing they have little prospect of income. Many are living out in the open, or in tents, so have no real semblance of shelter let alone security," Ana Locsin, Save the Children Country Director in Afghanistan said, stressing that the families "often feel they have little choice but to send their child to find work or to marry off their daughters."

According to Save the Children, over 650,000 Afghans have returned from Pakistan in 2016, while hundreds of thousands more are expected to return in the next few months. The Fund estimates that about 3,000 Afghans are repatriated daily from Pakistan because of tightened regulations.

Lost Childhood: Afghan Child Bride’s Harrowing Story of Marriage at 15
Locsin stressed that many of the repatriated Afghans live with small children and babies in Afghanistan’s border province of Nangarhar, either out in the open or in shelters that fail to meet minimum emergency standards.

Afghanistan is in a state of political and social turmoil, with Taliban insurgents and other extremist factions such as Islamic State (IS, also known as Daesh), outlawed in Russia and many other countries, taking advantage of instability in the country.

The issue of the repatriation of Afghan refugees, many of whom are residing in neighboring Iran and Pakistan, arose earlier in the year, after the Pakistani authorities deported undocumented Afghans who had not received official refugee status or whose temporary asylum application had expired.