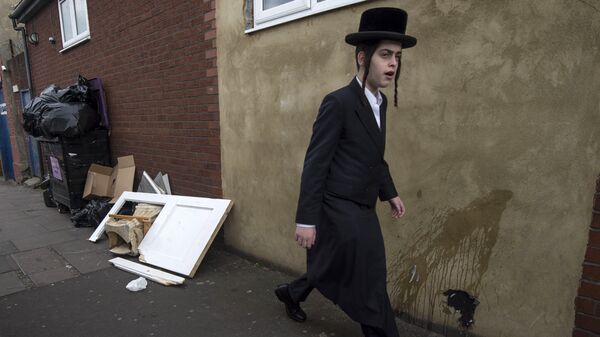 © AFP 2021 / NIKLAS HALLE'N
Subscribe
A number of other groups need to be added to the UK list of proscribed organizations after the British government banned a neo-Nazi organization called National Action, the Campaign Against Antisemitism told Sputnik on Tuesday.

EDINBURGH (Sputnik) — A spokesperson for the Campaign Against Antisemitism, told Sputnik:

"A number of violent Islamist and far-right groups in the UK have yet to be proscribed, for example the entirety of Hezbollah, not simply its so-called 'military wing,' as well as Combat 18, and the Racial Volunteer Force."

On Monday, UK Home Secretary Amber Rudd announced she was banning National Action describing it as "a racist, anti-Semitic and homophobic organization." The adding of National Action to the official UK proscribed organization list makes it a criminal offense in the United Kingdom to be a member of such a group or wear symbols associated with it.

"It is naturally very concerning for British Jews to know that prior to this proscription order against National Action, they were able to recruit, organize and even provide combat training entirely legally," the spokesperson added.

Asked by Sputnik what evidence there was for rising anti-Semitism in the United Kingdom, Falter said that figures for 2016 were still be collated but historical data showed hate crime targeting Jews was on the rise.

"We have not yet received the figures for 2016, but 2015 was the worst year on record for anti-Semitic hate crime, with a 26% rise in crime targeting Jews and a 51% surge in anti-Semitic violent crime," they added.

Most of the 70 organizations banned in the United Kingdom are Islamic extremist or Islamic terrorist organizations. Individuals found guilty of being a member of groups on the list face a 10-year sentence and an unlimited fine.