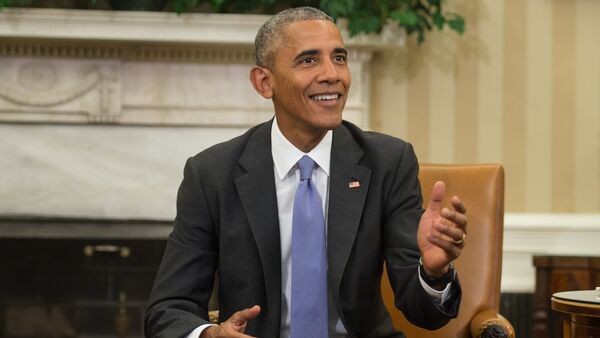 Outgoing President Barack Obama released a report detailing the domestic and international legal framework for US wars and counterterror operations abroad and ordered national security agencies to update it annually for public release.

WASHINGTON (Sputnik) — In a memorandum to the US Congress, Obama ordered national security agencies and government departments to update the report annually and arrange for it to be released to the public.

"I am directing national security departments and agencies to take additional steps to share with the public further information relating to the legal and policy frameworks within which the United States uses military force and conducts related national security operations," Obama stated on Monday.

The report justified US military operations under the 2001 Authorization of Military Force (AUMF), passed in the aftermath of the September 11, 2001 terrorist attacks against the United States that gave the president the power to use "all necessary and appropriate force" against anyone connected to the attacks.

US Relying on Tech Sector Progress to Counter Terrorist Internet Content
Armed conflict between the United States and terrorist organizations such as al-Qaeda will end when the groups and their networks have been degraded to the degree they are "no longer… able to attempt or launch a strategic attack against the United States," the report stressed.

Although the US Constitution limits the power to declare war to Congress, the Obama administration has previously cited the AUMF as legal justification for military actions against the Taliban, al-Qaeda and the Islamic State, including current military operations in Iraq, Syria and Libya.

The US-led coalition of more than 60 nations has carried out airstrikes against the Islamic State in Iraq and Syria since 2014. The report reiterated the administration’s stance that is conducts the operations in Iraq with the consent of the government.

In Syria, where coalition operations are conducted without government approval, the report said US operations provide "support to opposition groups fighting [the Islamic State] in the collective self-defense of Iraq (and other states) and in US national self-defense" by eliminating Islamic State and al-Qaeda safe havens.

Obama said the report was part of his attempt to increase transparency around US national security and military operations.