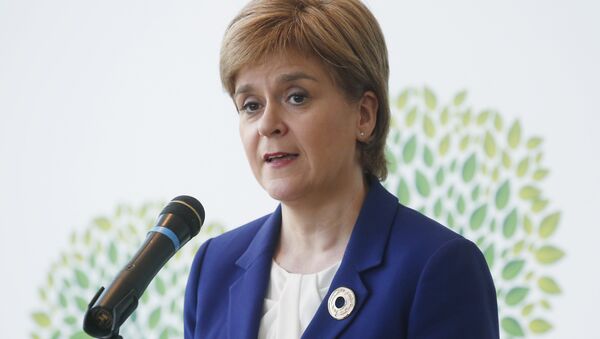 © AP Photo / Kin Cheung
Subscribe
Scotland’s First Minister Nicola Sturgeon plans to publish its proposals focused on how to keep Scotland in the European Union despite Brexit, the minister announced at the European Green Party conference in Glasgow.

Parents Against UK Pupil Nationality Data Collection Amid Brexit Uncertainty
LONDON (Sputnik) – "If that is the message of the UK Government, that no matter what Scotland thinks or wants or votes for that we simply have to accept whatever hard Brexit — with all the damage to our economy, our society, our culture, our place in the world that that will do — then it is hardly surprising that the question of Scottish independence arises again," Sturgeon said on Friday as quoted by The Herald Scottish newspaper.

Sturgeon admitted that keeping Scotland in the European single market would be difficult and that the special arrangements that Scotland seeks are not something that can be easily achieved.

"We know that the rest of the EU will negotiate with the UK Government, but it is important to us that we get that message across, that Scotland wants to remain part of the European family," Sturgeon stressed on Friday, urging the conference participants to tell their "fellow citizens that Scotland believes in European co-operation as a vehicle for positive change."

Following the referendum, Sturgeon said that Scotland would consider taking a vote on independence one more time after the September 2014 referendum, claiming that the Brexit referendum outcome neglected Scotland’s willingness to stay in the European Union.