Lavrov: Creation of 'Army of Aleppo' Could Just Be Rebranding of al-Nusra Front 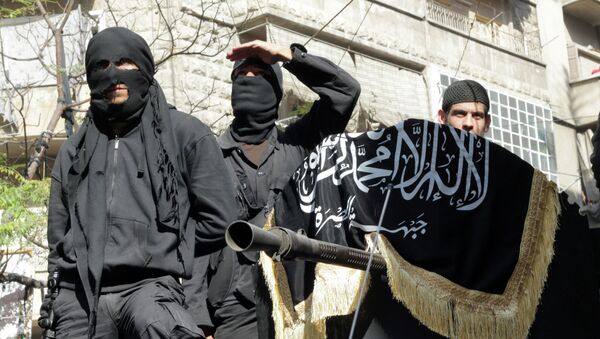 © AFP 2021 / KARAM AL-MASRI
Subscribe
Opposition behind the creation of the so-called "Army of Aleppo" in the eastern part of the city could seek to rebrand al-Nusra Front terrorists and shield them, Russian Foreign Minister Sergei Lavrov said Friday at a joint press conference with his Italian colleague Paolo Gentiloni.

"I do not rule out that this is just another attempt to rebrand al-Nusra Front and shield it from righteous retaliation," he said.

Lavrov said that almost all armed groups in Eastern Aleppo (where the so-called "Army of Aleppo" was formed) are controlled by al-Nusra Front.

"As  I have already mentioned, according to our intelligence,…practically all armed opposition groups in eastern Aleppo report to al-Nusra Front. Nusra has some 1,500 militants there, while other groups under its command have up to 6,000 militants," Lavrov stressed.

Political forces that put forward ultimatums and demand the ouster of Syrian President Bashar Assad have been blocking the intra-Syrian reconciliation talks for more than six months, Lavrov said.

"Unfortunately, for more than half a year the talks are being blocked by those who, in violation of the UNSC resolution, put forward ultimatums in the form of an absolute precondition to oust President Assad, which is, certainly, unacceptable, because these demands are not part of the concluded agreements," Lavrov told reporters.

Syria has been in a state of civil war since 2011, with government forces fighting the Syrian opposition groups striving to overthrow President Bashar Assad. In parallel, Damascus has to counter numerous terrorist groups, in particular, al-Nusra Front and Daesh.

"De Mistura proposed allowing all terrorists to leave Eastern Aleppo, we, despite the idea's controversy, supported it and were ready to cooperate with it," he said.

"The idea was blocked by those who, we are convinced, are interested in Eastern Aleppo remaining under the control of terrorists. We are still ready for what de Mistura said," he said.

Speaking of the clearing of the Castello Road of mines, Lavrov said that "after the liberation of a considerable part of Eastern Aleppo, there are no more threats… of attacks on humanitarian convoys that will travel along that road."