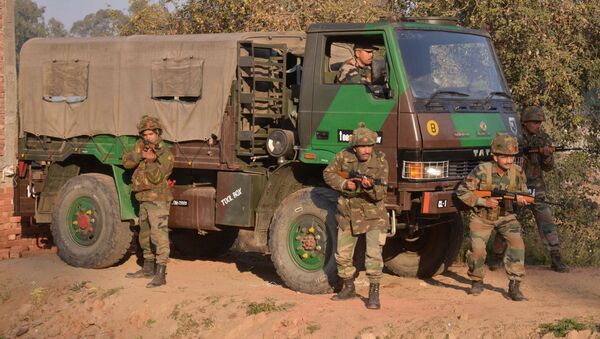 India, Pakistan Skirmish in Kashmir Leaves Soldiers, Civilians Dead
NEW DELHI (Sputnik) — The Nagrota artillery army unit was attacked by the militants with grenades at 5.30 a.m. local time (00:00 GMT), the NDTV television broadcaster reported. One militant was reportedly killed, while four could be hiding in the military camp.

The army has cordoned the area and restricted the traffic, local schools have been closed, according to the broadcaster.

The Indian Border Security Force also intercepted Tuesday morning a group of militants, attempting to cross the border at Ramgarh in Jammu and Kashmir's Samba sector, two of them were reportedly killed.

India and Pakistan have a dispute over the Jammu and Kashmir region since gaining independence from the United Kingdom in 1947. The conflict has already provoked two wars between the countries. The Line of Control, where the incidents took place, separates the Indian-controlled part of Kashmir from the territory under the jurisdiction of Pakistani forces.