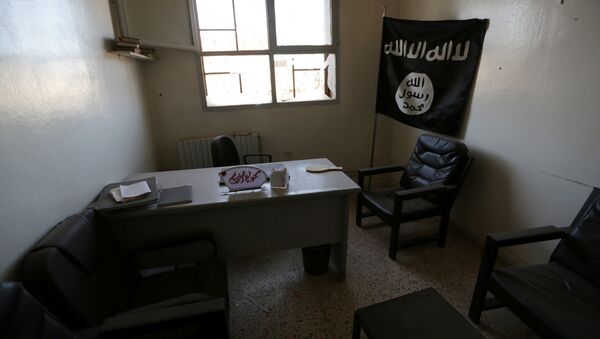 A large trove of intelligence concerning possible attacks on Europe was found by the coalition against the Daesh jihadist group after militants retreated from some of the Iraqi settlements they were holding, UK media reported Monday.

MOSCOW (Sputnik) — A lab was set up on site to examine the electronic devices the militants left behind and to send them over to intelligence agencies afterward, The Telegraph newspaper reported, citing Maj. Gen. Rupert Jones, the second in command of the US-led coalition, as a source.

The liberation of the city of Manbij, which served as an important hub for terrorists traveling to Turkey or to Europe, helped to uncover "a huge amount of intelligence," but the coalition expects to find even more information about the militants' plans as they proceed toward Mosul, according to Jones.

"We have ramped up as a coalition our ability to gather and process all that intelligence, because it will be a labyrinth of intelligence and we need to get that into the hands of intelligence agencies," Jones said, as quoted by The Telegraph.

On October 17, Iraqi Prime Minister Haider Abadi launched the operation to retake Mosul from Daesh, outlawed in many countries, including the United States and Russia. The operation began with 4,000 Peshmerga fighters and 30,000 Iraqi soldiers backed by the US-led coalition.

The Iraqi army and anti-terrorist unit managed to enter some of the eastern neighborhoods of Mosul, while Shiite militias try to liberate from the terrorists the strategically important city of Tal Afar, and to cut off supply routes for the Daesh militants located in Mosul.